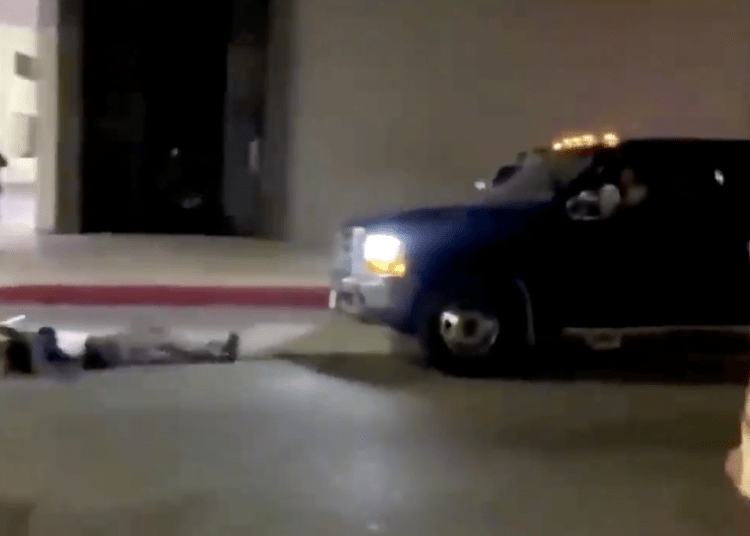 LOS ANGELES — At least one person was taken to a hospital Thursday night after multiple vehicles reportedly drove through a mob of Breonna Taylor demonstrators in Los Angeles, according to reports.

Videos posted on social media showed a large group of people walking down Sunset Boulevard in Hollywood around 9 p.m., to protest the Kentucky grand jury’s recent decision on the March shooting death of Taylor

Chants of “F— these racist a– police!” turned to screams when a blue pickup truck — driving against the flow of demonstrators — struck at least one sign-holding person, who fell backward onto the street, KCAL reported.

A rioter was hit by a truck earlier tonight in Los Angeles. pic.twitter.com/WTLsKH7uYF

Fire crews responded to the scene and transported the protester to a local hospital, according to FOX 11 Los Angeles.

A separate video appeared to show people converging on the vehicle before the incident.

After the protester was struck, the crowd started hitting the vehicle, which continued forward until police caught up, KCAL reported. The unidentified male driver was initially detained by law enforcement before being allowed to leave.

Later, around 9:30 p.m., a white Toyota Prius reportedly approached the same protesters at a busy intersection, prompting them to attack the vehicle, according to the station. It wasn’t clear if anyone was injured during the second incident.

Prius driver plows through crowd, gets run down by a pickup truck, gets car smashed up, crashes into another car, speeds away (? KCAL) pic.twitter.com/QVoK2l4kP9

The Prius sped off before being blocked in by a black truck and a green convertible farther down Sunset Boulevard. Demonstrators hit the car with bikes and skateboards before it backed up, hit the convertible, and drove away, FOX reported.

At least 200 people had gathered outside the entrance to the Hollywood Forever Cemetery during a second consecutive night of protests in the city. Earlier, vehicles could be heard driving by the protest honking in support, according to FOX 11.

On Wednesday, a driver was detained in Denver after allegedly plowing a vehicle into a crowd of protesters, reports said.