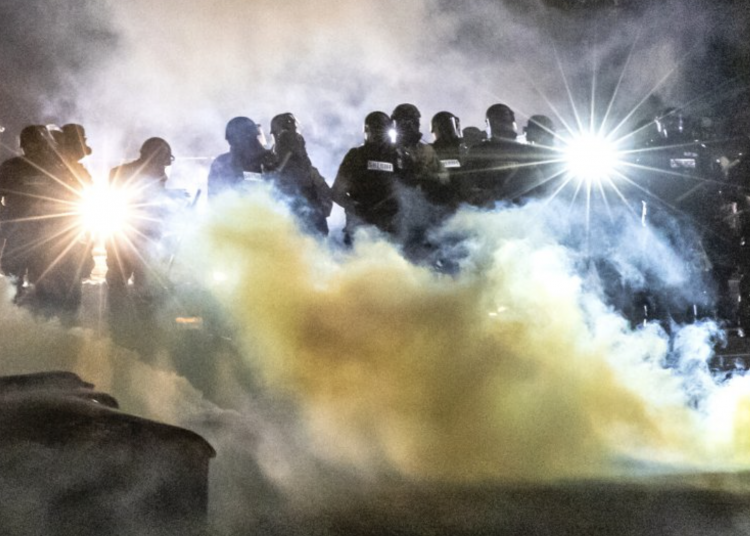 The Minnesota police shooting of Daunte Wright reignited angry protests across many US cities Monday night — with a riot declared in Portland, Oregon, as a mob of hundreds attacked police, according to officials.

At least 40 people were arrested during a second night of violence in Brooklyn Center, the city on the outskirts of Minneapolis where Wright was killed Sunday, and protesters gathered in other cities, New York Post reported.

Authorities say 40 people were arrested in the Twin Cities for breaking curfew, fighting with police and attempted burglary during the second night of protests and unrest following the fatal police shooting of Daunte Wright. | https://t.co/B0Ccv6xXbD pic.twitter.com/3sp2TzvB3G

Protests erupt in the US city of Minneapolis after police fatally shot a young Black man named Daunte Wright – in pictures https://t.co/JVjzyQEibl pic.twitter.com/cpXNwe7e6d

“Burn the precincts to the ground, in every city and every town!” a mob marching through Portland was filmed chanting.

There were also reports of demonstrations in Los Angeles, while areas of Seattle were covered in anti-cop graffiti as black-clad protesters repeatedly blocked main roads, KIRO 7 reported.

In New York City, dozens of marchers shut down a portion of the Manhattan Bridge Monday night.

Only one woman, a 22-year-old, was issued summonses, for obstruction of governmental administration, resisting arrest and criminal possession of a weapon for having pepper spray, the NYPD said.

However, Portland — the troubled city that saw the most turbulent protests in wake of George Floyd’s death last May — once again saw Antifa militants clash with cops and attempt to storm government buildings Monday night, the Post reported.

Police said reports first came from homeowners that people marching through their area were stealing rocks and landscaping bricks to use as weapons against police in the city center.

They then tried to storm the Penumbra Kelly Building, which houses offices for multiple law enforcement agencies, including Portland police and Multnomah County Sheriff’s Office.

Portland Police reported that there was a crowd of “approximately 200 people, most acting aggressively toward police.”

“People [threw] glass bottles, frozen water bottles, rocks, ball bearings and other objects, and shot fireworks parallel to the ground in the direction of police and the building,” the department said, initially declaring it an unlawful gathering.

“The conduct of the crowd did not improve, and incident command declared a riot.”

Officers responded with less lethal munitions and flashbangs, and at one point bull-rushed protesters, pushing them to the ground and macing them, The Oregonian reported.

Elsewhere in the city, a group cut through a chain-link fence to access a parking lot at the historic building that houses Portland Police Bureau traffic offices at the same time as the riot was happening, the agency said.

The suspects, who fled before officers responded, had smashed windows and slashed tires of several police vehicles.

In Seattle — another hotbed of violent protests last year — police warned people to avoid an area where protesters were repeatedly blocking traffic.

Photos shared by police showed graffiti including “BLM” and the anti-police phrase, “F–k 12.”

Police are monitoring a group marching #downtown. Multiple businesses along 5th Ave have been vandalized as the group marches southbound. Police have given multiple warnings to not block traffic and keep demonstration peaceful. Group currently at 5th Ave and Columbia St. pic.twitter.com/QRmaG0qL7D