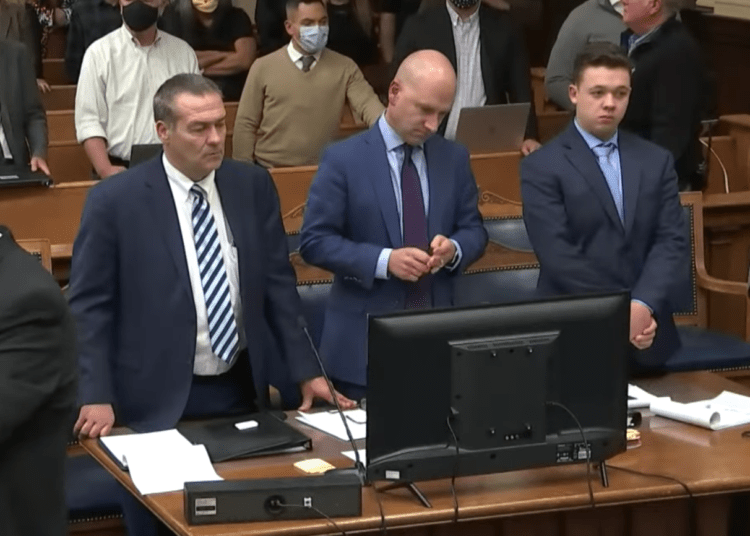 Kyle Rittenhouse and his defense lawyers during trial. (YouTube)

KENOSHA, Wis. — Lawyers representing Kyle Rittenhouse accused prosecutors of several miscues in their formal motion for a mistrial, according to court documents.

The defense team for Rittenhouse already called for a mistrial during the hearing, and filed a formal seven-page request less than an hour before closing arguments Monday, the Chicago Tribune reported.

The motion highlighted some of the prosecutors’ missteps that had Judge Bruce Schroeder railing at them, including mentioning evidence they’d been warned not to use. Moreover, it also outlined what is considered a major faux pas, according to legal analysts, commenting on the defendant’s right to remain silent after his arrest.

Furthermore, the motion accused prosecutors of holding back the high-resolution drone footage used to try to suggest that Rittenhouse had been the aggressor when he claimed self-defense prior to the first shooting, according to the New York Post.

Prosecutors gave the defense a hard-to-see, low-res version in a 3.6MB file — less than a third of the high-res file they actually had, according to the motion.

The defense only received a better-quality clip, already used by prosecutors, on Saturday, after testimony had concluded, the motion emphasized.

“The video footage has been at the center of this case,” the defense motion states, further calling it the “linchpin in their case.”

“The failure to provide the same quality footage in this particular case is intentional and clearly prejudices the defendant,” the motion said, according to the Post.

The defense insisted that prosecutors’ missteps during the trial were willful acts. The lawyers actually suggested the prosecutors wanted a retrial to “get another ‘kick at the cat’ because the first trial is going so badly.”

“The testimony in this case up to that point had not gone very well for the prosecution,” the motion declared, citing witnesses who appeared to corroborate Rittenhouse’s claim that he was under attack when he opened fire.

The testimony of Gaige Grosskreutz would clearly fit this category as he acknowledged under oath raising his firearm toward Rittenhouse, even though he later downplayed and moreless recanted his courtroom testimony while making an appearance on Good Morning America.

As a result of the allegations of prosecutorial miscues, the motion argues any conviction should be overruled. Hence, they also seek to forbid any chance of a retrial if Rittenhouse is cleared of the alleged crimes.

The motion to dismiss has yet to be formally addressed by the judge. It will likely be a matter of business in court after the jury finishes its deliberations, which on Wednesday are entering a second day.