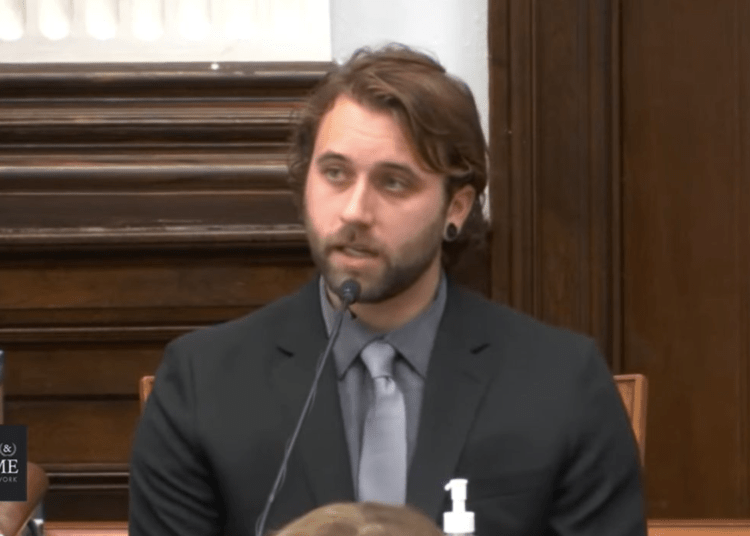 Now that the lies about Kyle Rittenhouse have been debunked and he is acquitted of criminal homicide in the shooting deaths of Joseph Rosenbaum and Anthony Huber, as well as the shooting of Gaige Grosskreutz and the “reckless” discharge of a firearm at “jump kick man,” it’s time for the real criminal to be charged.

Grosskreutz was participating in the havoc the night of the Kenosha riots when he survived being shot in the arm by Rittenhouse, who was defending himself. Hence, there are two key facts that came out during trial, which should lead an ethical prosecutor to file criminal charges against him.

First, it was established that Grosskreutz is a liar. During cross-examination, the defense was able to get him to admit that he lied to police on multiple occasions by claiming he dropped his firearm. He acknowledge that prior statements to police about dropping the gun were not true, and that he was carrying the weapon even though his permit to do so had expired.

Upon further questioning, the defense asked Grosskreutz if he saw Rittenhouse behaving in a threatening manner, raising his voice, pointing his gun at people. Grosskreutz acknowledged that he did not see the defendant acting in that manner.

Second, the prosecutor showed video recordings from Aug. 25, 2020, the night in question. Grosskreutz said he had his weapon drawn when he approached Rittenhouse. The defendant subsequently shot him in the shoulder, Law Officer reported.

“Did there come a time when you were running that you did pull your gun out?” The prosecutor asked. Grosskreutz claimed be thought Rittenhouse was “an active shooter.” (One of the debunked leftwing lies.)

“If I had to,” Grosskreutz said. “I didn’t draw my firearm with express intent of using it. But also being ready if I had to use it.”

Not only was Grosskreutz proven to be a liar on the witness stand, he went on Good Morning America after testifying and contradicted his testimony, which leftwing news organization failed to challenge.

Here is what Grosskreutz said on Good Morning America at the key moment:

Host Michael Strahan asked, “You’re saying you weren’t pointing your gun at him?”

Defense attorney: “You would agree your firearm is pointed at Mr. Rittenhouse correct?”

Defense: “Once your firearm is pointed at Mr. Rittenhouse, that’s when he fires his gun, yes?

Defense: “Sir, look…Does this look like right now your arm is being shot?”

Grosskreutz: “That looks like my bicep being vaporized yes.”

Defense: “It’s being vaporized because you’re pointing a gun directly at him, yes?”

Defense: “When you’re standing 3-5 feet from him with your arms up in the air he never fired. Right?”

Defense: “It wasn’t until you pointed your gun at him, advanced on him with your gun, now your hands down, pointed at him, that he fired, right?”

The defense introduced this still shot they say shows Grosskreutz with the gun as his bicep “vaporized.” Rittenhouse is claiming he feared for his life at the hands of Grosskreutz and acted in self-defense.

As a result, the man who is tied to the People’s Revolution Group, according to Wisconsin Right Now, should be charged with felony assault with a deadly weapon or (minimally) misdemeanor brandishing a firearm in a threatening manner. He was the aggressor who attacked Rittenhouse, which is why the jury could not convict the defendant on the charge involving Grosskuetz. His own testimony, his lying disposition, Rittenhouse’s testimony against him, as well as video evidence should suffice to convict this Cretin.

For those who think Grosskruetz is a boy scout, or a pacifist as he testified, think again. He is a violent career criminal with a laundry list of prior offenses and convictions stretching back more than a decade.

These include domestic abuse, prowling, trespass, two DUIs, felony burglary and two charges of carrying a firearm while intoxicated – one of which took place when he was banned as a felon from carrying a firearm, Daily Mail reported.

He also has a history of showing disdain for the law by lying to, and failing to co-operate with police … and this was before the Rittenhouse case.

Finally, I have no delusions that a prosecutor will file criminal charges against Grosskruetz. Furthermore, I am not giving “jump kick man” a free pass. If half the information being reported about him in the past two days is true, I will articulate in a future article why he should be Grosskruetz’ cellmate.