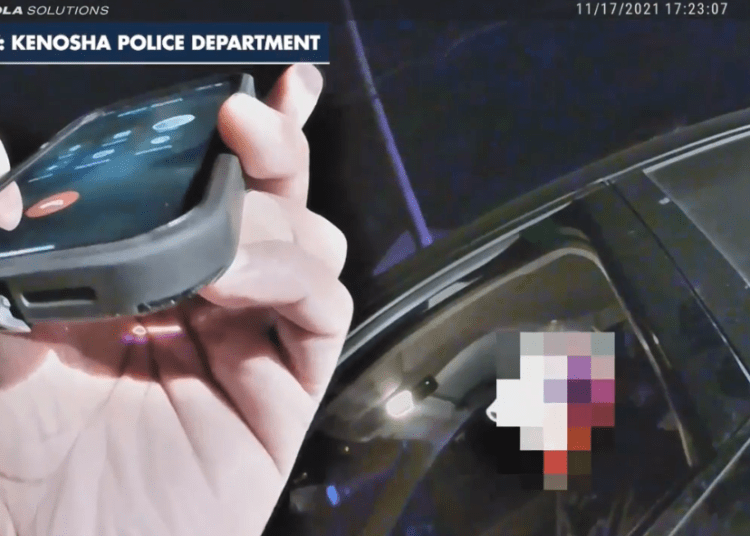 KENOSHA, Wis. — Toward the end of the Kyle Rittenhouse trial, Judge Bruce Schroeder banned MSNBC from the courtroom after a man claiming to be a producer for the network was accused of following the “sealed” jury bus one evening, Law Officer reported.

The man identified himself as James Morrison when he was pulled over for a traffic violation — running a red light — Nov. 17, while trailing the jurors bus from the Kenosha County Courthouse.

“He stated that he had been instructed by [a superior] in New York to follow the jury bus,” the judge noted at the time.

After the incident, NBC released the following statement:

“Last night, a freelancer received a traffic citation. While the traffic violation took place near the jury van, the freelancer never contacted or intended to contact the jurors during deliberations, and never photographed or intended to photograph them. We regret the incident and will fully cooperate with the authorities on any investigation.”

Recently released officer bodycam “video seems to confirm that NBC was intentionally misleading on the key fact of whether it ordered Morrison to follow the jurors,” legal analyst and law professor Jonathan Turley noted.

During the encounter, the officer asks Morrison, “So were you following a vehicle?”

Morrison replied, “I was trying to see – I was being called by New York going, maybe these are the people you need to follow, but I don’t know, I was trying to –”

The officer then interrupts and asks directly “You were trying to what?”

“Just do what they told me to do,” Morrison said.

“New York told you to follow a vehicle?” the officer asked.

The officer’s line of questioning focused on Morrison’s knowledge of the van’s occupants. Morrison just said that he did what “New York” told him to do. He said he was “just trying to find a location, that’s all.”

Morrison then called NBC producer Irene Byon and put her on the phone with the patrol officer. The officer questioned Byon about why NBC ordered the following of certain “vehicles.”

Although she hemmed and hawed in an apparent attempt to divert the question, it was Byon who unintentionally admitted that they wanted to specifically follow jurors.

She said that they were not trying to actually speak to “any of the jury members,” Turley pointed out in his article.

Byon could be heard saying:

“Hi officer, my name is Irene. I’m a booking producer with NBC News. We were just trying to respectfully – just trying to see if it’s possible to find any leads about the case. And so we were just keeping our distance, just to see where people involved in the trial are positioned. By no means were we trying to get in contact with any of the jury members or whoever is in the car. We just were trying to see where key players in the trial may be at.”

The officer then asked, “You advised him to follow any vehicle? Did you know which vehicle he was following?”

“The important take away is that there was never any question that NBC ordered Morrison to follow the jurors. That was the critical question for the officer and for the Court. Yet, it is the one thing that NBC left out of its statement. As a news organization, NBC would shred a subject of a story who happened to leave out such a material fact. Instead, NBC issued a statement that could be read to suggest that this was just a total and unfortunate coincidence.  It was merely a ‘traffic violation took place near the jury van.’

“There is unlikely to be any media demands for NBC to address the misleading statement, but the tape shows that Judge Schroeder was right to ban MSNBC, which not only followed jurors but then failed to be open about its own conduct in the controversy.”

When Judge Shcroeder barred the news outlet from the courtroom, he said, “I have instructed that no one from MSNBC News will be permitted in this building for the duration of this trial. This is a very serious matter.”

Now that truth has boiled to the surface, it’s unclear if he plans further action against the news organization.