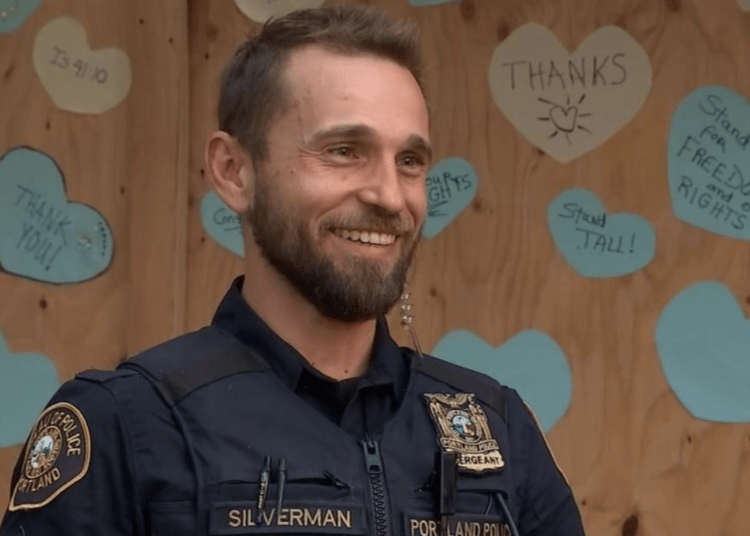 The violent clashes between police and protesters have left the city scarred by fires, tattooed with graffiti and dotted with boarded-up buildings, KPTV reported.

Yielding to protesters, the Portland City Commission voted to cut $16 million in funding from the police bureau. Among other transgressions, the city also barred Portland Police from communicating or working with federal police.

Yet the feckless leadership goes beyond the city as the new Multnomah County District Attorney, Mike Schmidt, last week announced that he wouldn’t prosecute protesters who face charges of rioting, interfering with a peace officer, or second-degree disorderly conduct, among other offenses.

KPTV interviewed a Portland Police sergeant to get his perspective of the “countless nights” he’s worked the front lines of protests and riots.

“It’s been really hard,” said Sgt. Josh Silverman. “It’s a little bit like putting your head down and weather the storm.”

The police bureau has released photos of officers’ injuries from fireworks and other objects hurled by protesters.

“We’re getting banged up,” Silverman said. “We’ve had some broken hands, broken wrists, broken foot, stuff like that, some concussions.”

“I’ve had some hearing loss,” Silverman added. “I’ve had mortars explode right next to me, my pants have singed and destroyed, but no serious injuries.”

There’s also the invisible wounds. Officers responding to protesters are taunted with expletives and insults on top of demands for defunding police and beliefs that police work is harmful to society.

“That cuts because we care about those things,” Silverman said. “We got into this job to protect vulnerable people.”

Night after night, officers say the same small group of people come out under the guise of supporting Black Lives Matter but make it their mission to provoke police, the news organization reported.

“If we respond, we are overzealous thugs and if we don’t respond, we are (neglecting) our duty and we’re letting a building burn to the ground, and so they realize they can put us in a no-win situation,” Silverman said. “We are focusing so much energy on these folks who don’t want to improve police response in their city and instead are bent on destruction. That’s the tragedy of this.”

“For me to quit now when we’re on the precipice of moving toward a different type of policing, I think would be irresponsible and I want to be a part of it, so no, I’m not going to quit,” Silverman said.

“This job is incredibly important, even more so in a reform era,” Silverman said. “There are going to be changes and I’d like to be a part of those changes.”