Officer Krute Aroonsuck was a NYC police officer and U.S. Marine before going to work in Portland 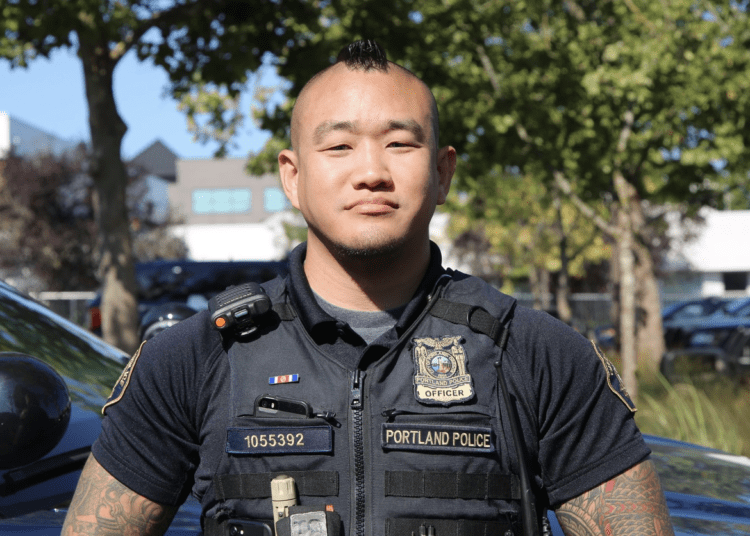 PORTLAND, Ore. — The Portland Police Bureau, like many other agencies, has been under siege for the past 81 days following the custodial death of George Floyd in Minneapolis.

Unless you’ve been living in a coma, chances are good that your world has changed due to protests, riots, or coronavirus. Sadly, far too many police officers have experienced all three to one degree or another.

It’s hard to imagine why political leaders would appease anarchists and rioters, yet they are doing it in so many jurisdictions.

A police officer’s perspective recently featured on Portland Police Bureau’s Facebook page is that of Krute Aroonsuck. He authored a piece that we’d like to share with our readers. We’ve included it below in its entirety.

The Path to Unity is Through Conversation
An Officer’s Experience on the Line
By Officer Krute Aroonsuck.

I’ve been a Portland Police officer for about 18 months. Prior to this, I was a New York City Police Officer in the South Bronx for six years. I lived and grew up in the Bronx, a diverse environment, for all of my life until I moved here. I also spent 13 years in the military, and I have a degree in Forensic Psychology.

I am Asian with a multi-racial and multi-cultural family. I was a Marine, a Buddhist monk, and now a police officer. I am a father. I am educated. I am many things that don’t often fit the mold for what the media would portray of a police officer, but in this regard I am not unique in my profession.

I believe this is a pivotal time in our history, but the path forward must be through conversation.

I worked the protests downtown during the first several weeks. At this time, the fence surrounding the Justice Center was still erected and officers were on one side, while the protestors were on the other side.

During those first few weeks, the cycle was pretty much the same each night. We had generally peaceful protests at the beginning of the evening, which then evolved into violent ones later. When the protests turned violent, officers were subjected to objects and fireworks thrown at them. Officers also endured threats to themselves and their families. This was unacceptable.

Contrastingly, during the peaceful hours, I engaged in conversation with people along the fence line. Whether I engaged them or they engaged me first, the conversations all followed a similar suit. The question would arise, asking if I supported their movement and if I believed Derek Chauvin was wrong, to which my response was “yes.” I always knew that the next question to follow would be some sort of, “then why are you a cop or on that side of the fence?” My answer was always the same: “To be in support of a movement to further the better treatment of blacks and to be a police officer, are not mutually exclusive. You can be both and it is paramount that we are.”

Often during the conversation, protestors would approach and tell the person to stop talking to me because I was a cop. I found this perplexing, because people were exercising their First Amendment rights to promote change, yet they did not want to engage in any sort of conversation. It just seemed that was the least productive approach. To my surprise, many of those who I was talking to began to argue back and actually defend me. I saw that through our conversation, we had reached a common ground and found unity in our understanding. That can only be achieved through an honest and frank discourse.

Another common topic was the fact that a lot of the protestors did not have any real life experiences with police officers, nor did they have any extensive relationships with people of color. It demonstrated to me that there was a lot of misinformation being spread and that more conversations needed to be had.

The topic of systemic racism also arose, as well as their belief that law enforcement was inherently racist. I always began discussions with the thought that I believed racism still existed and it is a problem. However, it is my belief that it is not a law enforcement problem, but a societal problem. Racism exists in all of society and professions. I don’t believe that someone goes into law enforcement and then becomes a racist. After discussions, we would all agree that officers must do better, but it was a responsibility incumbent upon everyone in society. Everyone had to do their part. I believe that law enforcement is often brought in toward the end of someone’s problems. If law enforcement is responding, then often it is because society had already failed them. To this, many would bring up systemic racism and I pointed out that the change had to be made specifically to the system. Law enforcement is simply a tool. If the belief is that police enforce racist laws, then we must work together to change those laws. We do that by addressing the disparity and injustice with our elected legislators.

My conversations also took on some practical, enlightening topics. I often place my hands around the collar of my external vest and leave them hanging at a rest. A protestor accused me of covering up my nametag. I saw this as an opportunity to explain to him why officers often stood as I did. I told him that it simply, was the best place for me to place my hands that would not be perceived as threatening to the public. For those who have never worn a protective vest, it causes you to unnaturally hoover your arms around your torso. At my previous department, I did not have the option of an external vest and often found my hands resting upon my belt around the sides of my waist. Unfortunately, it placed my hands in close proximity to my firearm, which sometimes became misconstrued as me being ready to draw my weapon. The incident taught me that what I believed to be obvious and practical, was not always the case. There was still a lot that the public did not understand about why police do what we do or behave certain ways. It also taught me that I could not take things for granted and simply expect the public to understand these things without explanation.

Through these talks, I realized that the hurt and pain is real, but the anger is often misdirected. Toward the end of my conversations, those that I spoke with began to realize this as well. They strongly suggested that there should be units out there getting to know the people and developing relationships just as I had done on the fence line. To me, it was clear that more information needed to be out there. The public needed to become more educated about policing and that we as officers could not rely on someone else to inform them. We had to demonstrate that a single incident, was not representative of all law enforcement throughout the nation. We had to bridge that gap. The issue is a societal one that requires all hands. I invite anyone out there interested to reach out and continue the conversation.

Sgt. Josh Silverman of the Portland Police Bureau recently provided his firsthand account of the strife as well.

“It’s been really hard,” said Sgt. Silverman. “It’s a little bit like putting your head down and weather the storm. … We’re getting banged up. … We’ve had some broken hands, broken wrists, broken foot, stuff like that, some concussions. … I’ve had some hearing loss. … I’ve had mortars explode right next to me, my pants have singed and destroyed, but no serious injuries.”

However, through it all, Silverman remains optimistic and desires to remain in law enforcement, Law Officer reported.

Finally, Law Officer salutes Officer Krute Aroonsuck, Sgt. Josh Silverman, along with all the men and women on the front lines of the ongoing protests and riots. YOU ARE TRUE HEROES!