The event was violently disrupted by Antifa militants 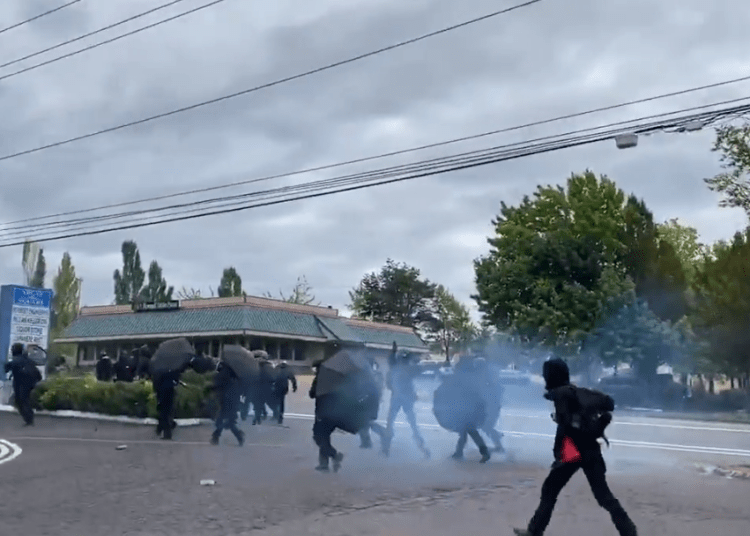 PORTLAND, Ore. – Organizers of a patriot-themed rally that was aggressively disrupted by violent Antifa militants armed with homemade explosives have filed a tort claim against the city of Portland, Oregon, its mayor, and county prosecutor saying they intend to file a lawsuit.

The Feb. 18 tort notice seen exclusively by the news outlet claims the parties’ decisions resulted in “violence, trauma, mental and physical damages for the women, caused by the protesters, despite event organizers moving the event to another location to avoid the threatened violence.”

The event was titled, “Summer of Love: Patriots Spreading Love not Hate.” However, with the outside hostilities, it did not develop as planned.

The well-intentioned gathering devolved into a series of physical confrontations after Antifa militants arrived to disrupt and extinguish the planned event in northeast Portland.

Some people sympathetic to the rally organizers fought back and eventually a brawl erupted. According to the Post Millennial, a van driven by Antifa was overturned by some rally attendees in a viral video at the time.

Antifa are retreating & throwing explosives in the process after launching an attack on the right-wing rally in northeast Portland. They’re being chased & hit. Video by @TaylerUSA: pic.twitter.com/eLDNMirI3r

Since the brawl occurred, several members of the patriotic-themed rally have been arrested and charged with various offenses, including one man involved in a gun battle with an Antifa combatant.

However, no one from the Antifa side has been arrested to date, although police are still asking for help in identifying some of the masked assailants, according to the Post Millennial.

The Portland Police Bureau issued a press statement prior to the event saying that officers would not intervene if a conflict erupted, Post Millennial reported.

“You should not expect to see police officers standing in the middle of the crowd trying to keep people apart. People should keep themselves apart and avoid physical confrontation,” Portland Police Chief Chuck Lovell stated via PPB press release on Aug. 20, 2021.

Portland antifa have been calling for violence at this weekend’s patriotic-themed “Summer of Love” rally organized by conservative activists. The rally is happening close to the one-year anniversary of the death of Aaron Danielson, who was murdered by a Portland #antifa member. pic.twitter.com/FB5AoucD2k

President of Latinos United for America Jen Loh announced the tort claim notice in a press release: “The people of Oregon will no longer tolerate politically based law enforcement and prosecution, nor the selective protection of 1st Amendment rights. This lawsuit is being brought in the hopes of being a catalyst of that change.”

Several weeks prior to the “Summer of Love” rally, a large group of vile Antifa antagonists carrying shields and weapons descended upon a group of Evangelical Christians congregating for a prayer and worship event at the waterfront in downtown Portland, Law Officer reported last summer.

After the worship service was publicized, Portland Antifa groups and activists on Twitter organized a direct action, which included smoke bombs and physical assaults.

Private video recorded at the scene showed the obtrusive individuals intimidating attendees. Adults and children were seen scurrying away as black-clad Antifa militants tore apart the sound equipment and assaulted victims with pepper spray and projectiles.

A woman attendee of the family Christian prayer event at the waterfront in downtown Portland describes what happened when antifa attacked them. https://t.co/OtbHVftDor

Law enforcement authorities reportedly did not intercede in the confrontation except to blow an air horn.