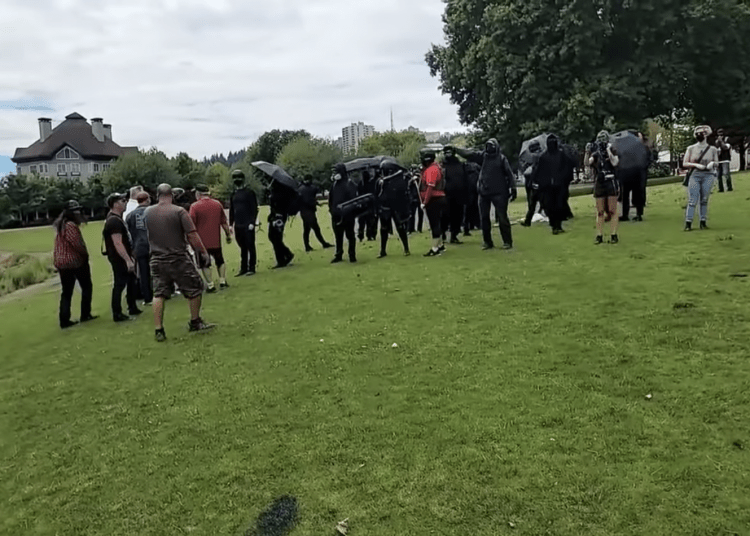 PORTLAND, Ore. — A large group of vile Antifa antagonists carrying shields and weapons descended upon a group of Evangelical Christians congregating for a prayer and worship event at the waterfront in downtown Portland, according to reports.

A woman attendee of the family Christian prayer event at the waterfront in downtown Portland describes what happened when antifa attacked them. pic.twitter.com/OtbHVftDor

Pawlowski grew up behind the Iron Curtain in Poland and likens the lockdowns to actions taken by a communist regime, Law Officer reported.

Alarming video from the scene on Saturday showed dozens of armed Antifa members in black bloc and riot gear aggressively moving in to physically confront attendees. One of the Antifa antagonists sprayed an attendee with an unidentified, gas-like substance that is suspected to be pepper spray. The congregation retreated in an attempt to de-escalate and avoid injury.

“Where is your god now?” an Antifa aggressor can be heard shouting. After pulling apart the sound system, militants tossed pieces into the nearby river, PM reported.

“All Cops are B*******, in the name of Jesus,” a male’s voice is heard saying during the melee, Fox News reported.

A woman can be seen panicking as she and her fellow parishioners backed away to avoid further altercation.

“They threw a flash bomb into a group of kids,” said a female attendee who spoke to a videographer at the scene while the injured were being treated. An Antifa account on Twitter later posted that they stole the Christian attendees’ food and water.

Fox reported that police did not intercede in the confrontation except to blow an air horn.

Antifa members have engaged in a recent string of assaults on Christian churches in Portland.