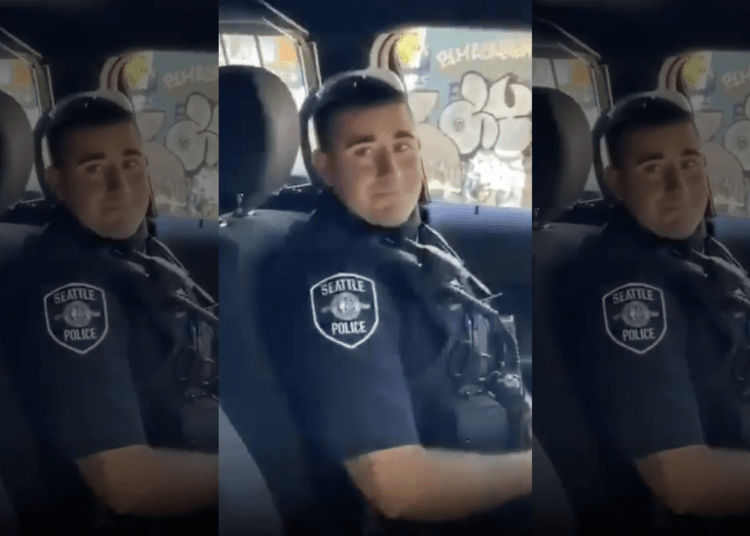 SEATTLE — In a sad scene of resignation a Seattle police officer told a person believed to be a BLM protester that he planned to resign due to the civil unrest and riots.

A video circulating on social media (see below) shows the unnamed officer drive up to a protester and have a short conversation.

“You having a good day today?” says the officer through his passenger side window, which is rolled down.

“Not really, you’re around,” replied the protester.

“You’re about to resign?” queries the hopeful protester with a touch of excitement in his voice.

“How you felling about that?” the protester asks, almost empathetically.

The conversation continues with the protester chumming up to the officer, even asking him to be interviewed (like he was going to join forces with them).

When the protester realizes the officer is not resigning due to “police brutality,” but because of the onslaught occurring against officers, he suddenly turns against his “new friend.”

Apparently shouting to other demonstrators, the protester says, “Hey, he said he’s tired of us. He’s gonna resign because of Black Lives Matter, not because he’s tired of the police.”

Now, returning to his caustic demeanor, the protester says, “Hey, you triggered boy? You triggered? Oink, oink, … oink, oink. F*** you and your blue life, boy.”

The insulting activist then repeats the inflammatory comments a second time when the officer appears to say something about being friends. The angered protester responds, “Nah, we ain’t never gonna be friends. We’ll never see eye to eye. I don’t give a f*** if you take that badge off, you’ll never be my people.”

See the dialogue below: