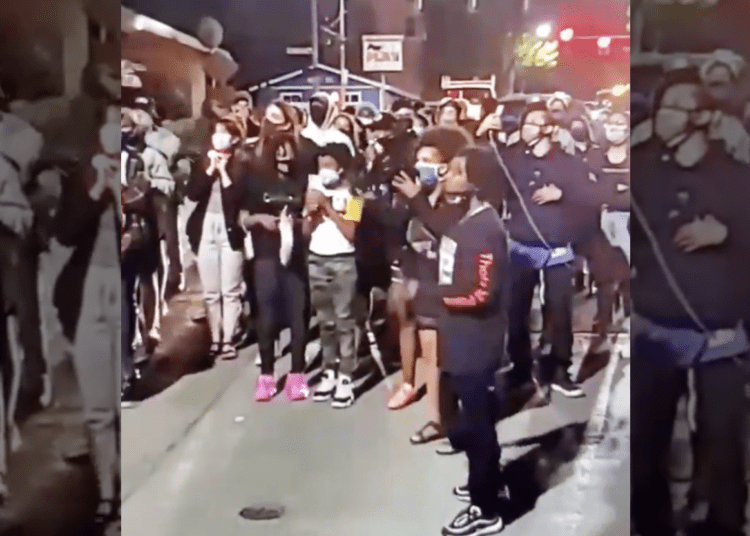 SEATTLE — A group of Black Lives Matter protesters in Seattle marched through a residential neighborhood this week demanding that white residents give up their homes, video shows.

Footage of the Wednesday mob posted to Twitter shows a crowd of dozens chanting “black lives matter” before an unidentified man projects his wrath toward nearby white residents. He shouts at them saying they are living in a historically black section of the city as another woman in the crowd yells that they should “give up” their homes, the clip shows.

“Do you know that before your white ass came here, this was all black people?” the man says. “Do you know people like you came in here and basically bought all the land from the black people for less than what it was worth, kicked them out so you could live here? Do you know that?”

The angry man continues: “’Cause if you don’t, now you f***ing do — now do something about it!”

Another woman in the crowd then urges the residents to “open their wallet” as the man continues to yell at the unidentified residents off-camera, the New York Post reported.

“So how do you plan to fix it?” the man continues. “As a gentrifier, because you are part of that problem.”

A woman with a megaphone then urges the residents to “give up” their house, the footage shows.

Seattle BLM protesters march through residential neighborhoods and demand white people give up their homes.

“Give up your house. Give Black people back their homes.” “what are you going to do about it? Open up your wallets.”pic.twitter.com/btRzqos0IR

A second clip purportedly shows BLM demonstrators and Antifa members calling for white people to “get the f*** out” as others in the crowd call for reparations.

Last night Seattle-area BLM radicals & antifa marched to residential areas. They shouted in support of “black criminals” and at one point demanded that white people move out. #SeattleRiots pic.twitter.com/qOFc8AhQpD

Yet another clip apparently shot in the aftermath of the protest also shows demonstrators threatening a business owner who called police to report that a window had been shattered at his business.

The protester then tells the man to “go back to his gentrification business” while yelling profanities at him, the Post reported.

The mask-clad white man then refuses to identify his business before being threatened as he walks away, the clip shows.

“Yeah, we’ll make sure to support you,” the protester continues. “Hey look, we don’t know what happened, we ain’t seen shit, we don’t know shit. You better hope we don’t find out though. That’s not a threat.”

“That’s a promise,” a second man then yells.

BLM protesters in Seattle harass and viciously berate police for arresting their comrade. A member of their group is accused of vandalizing a business. #BlackLivesMatter pic.twitter.com/3sspJclJbK

One of the protesters was then taken into custody for vandalism as other Black Lives Matter demonstrators yell obscenities at police, footage shows.

Moreover, Mayor Jenny Durkan is facing a legal challenge by residents trying to get her recalled and removed from office.