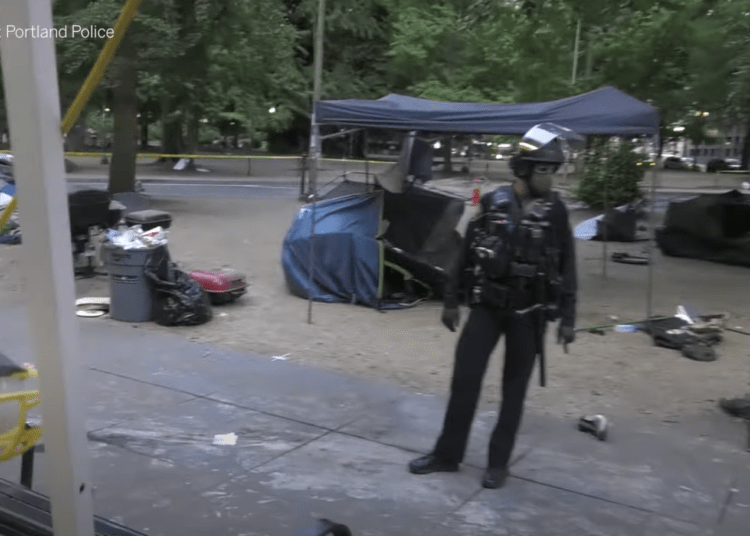 PORTLAND, Ore. — Portland police cleared an entrenched encampment at Lownsdale Square across the street from the federal courthouse in downtown early Thursday at the request of Oregon State Police, who are set to assume control of the scene of nightly riots that have roiled the city.

The Portland Police Bureau said the city park and neighboring Chapman Square, as well as the sidewalks surrounding them, will remain closed, reported The Oregonian.

The sweep will provide city staff with a safe environment to do repairs and “much needed renovation,” said Police Chief Chuck Lovell.

According to Mayor Ted Wheeler, the move was part of the plan for federal officers to leave the protection of the courthouse to state troopers.

This morning, @PortlandPolice will be working with Portland Parks & Recreation, the @multcoso, and outreach workers to clear Lownsdale Park. This is at the request of @ORStatePolice as part of the plan for federal officers to leave our community.

The parks have been the staging grounds for nightly clashes with federal officers from the Department of Homeland Security, Federal Protective Services and Customs and Border Patrol agents.

Thousands have gathered nightly at a fence erected around the Mark O. Hatfield United States Courthouse. The nightly mayhem included people setting fires, lighting fireworks and throwing rocks and other objects at the courthouse and federal officers, reported The Oregonian. The officers were forced to use tear gas and impact munitions to disperse the crowds. The governor and mayor have been unhappy with their presence.

On Wednesday, Gov. Kate Brown announced she had reached an understanding with the Trump administration that state troopers would take over protection of the courthouse, paving the way for federal officers to pull back.

On Thursday morning, Portland police cordoned off both squares with police tape as park rangers collected tents, tarps and supplies that had been left behind. They packed much of the debris — concentrated in Lownsdale Square — into trash bags and loaded it onto waiting trucks. Uniformed federal officers looked on from the portico of the courthouse, still separated by the fence that had been the flashpoint of riots hours earlier.

Clearing of Lownsdale Sq well underway amid the morning commute. Portland police stationed at corners of the park. pic.twitter.com/c83JDLhcVz

Roughly 40 to 50 people were cleared from the area and at least one person was arrested, police said, though they didn’t provide any other details.