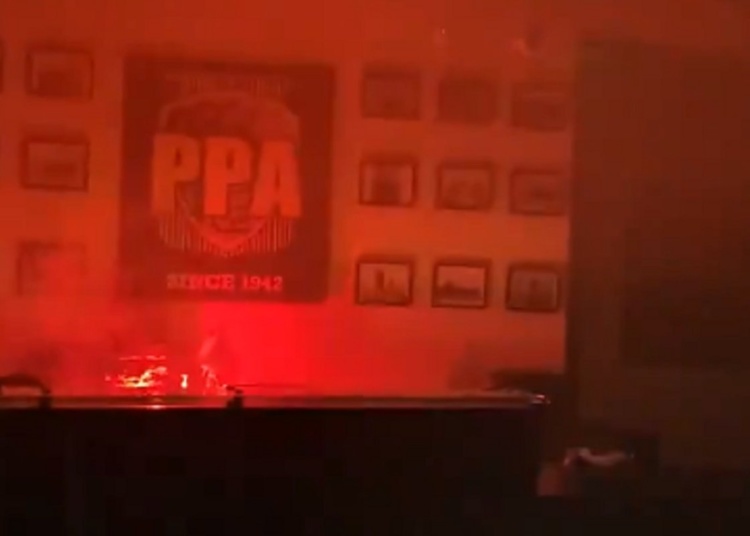 Rioters in Portland broke into the Portland Police Association building and set it on fire Saturday night with members inside.

For the first time in 50 days of rioting, the Portland Police Department changed their language from “protests” to “riots.”

According to FMNews, the fire at the Portland Police Association building was put out a short time later.

“As the crowd was dispersed, several people in the crowd were arrested and officers were able to extinguish the fire. Portland Police did not use any CS gas,” the bureau said in a statement early Sunday. Several arrests were made.

Rioters also gathered at the Portland Police Bureau’s North Precinct, vandalizing patrol vehicles and taunting officers who were reporting for work. Later, as police dispersed a group that had gathered near North Interstate Avenue, people threw rocks and paint-filled balloons at officers. Some were injured, the statement said.

Homeland Security Secretary Chad Wolf blasted the protesters as “lawless anarchists” in a visit to the city on Thursday.

“We are trying to help Portland, not hurt it,” Trump tweeted Sunday. “Their leadership has, for months, lost control of the anarchists and agitators. They are missing in action. We must protect Federal property, AND OUR PEOPLE. These were not merely protesters, these are the real deal!”

Despite the actions by the violent criminals, the action by police was condemned by Jo Ann Hardesty, a prominent member of the City Council. Hardesty said Saturday that local police “joined in the aggressive clampdown of peaceful protest.”

Hardesty also slammed Wheeler, telling the mayor he needed to better control local law enforcement. Hardesty, who oversees the city’s fire department and other first-responder agencies, said in an open letter to Wheeler if “you can’t control the police, give me the Portland Police Bureau.”