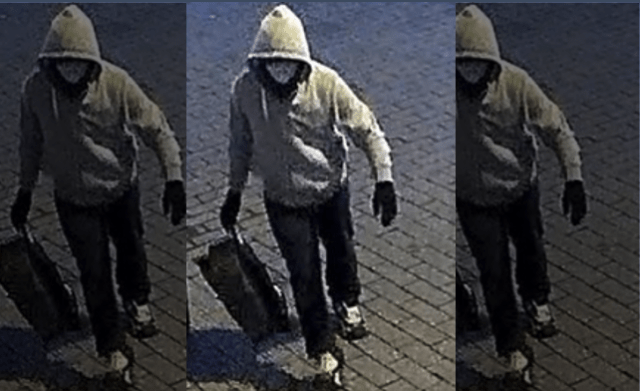 This person is believed responsible for leaving pipe bombs at the RNC and DNC offices in DC last week. (FBI)

WASHINGTON — The FBI on Monday released new photos showing the suspect believed to be responsible for placing pipe bombs in Washington, D.C., last week around the same time rioters stormed the U.S. Capitol, interrupting the official certification of Electoral College votes by Congress.

There is a $50,000 award for any information that leads to the location, arrest and conviction of the person(s) responsible for the placement of suspected pipe bombs on Jan. 6 at the Republican and Democratic national committee offices in D.C.

It’s not clear whether the images released depict one individual or more than one dressed in a similar fashion, Fox News reported.

A photo released by the FBI last week showed an individual dressed in a gray sweatshirt with a hood over his or her head and a white mask hiding the person’s face. The individual also wore gloves, sneakers, dark pants and carried a dark-colored backpack.

Additional photos released Monday were zoomed in to show the details of the backpack and shoes.

“If you recognize this backpack or these shoes, submit a tip at http://fbi.gov/USCapitol,” FBI tweeted.

The #FBI released new photos of the individual(s) responsible for placing suspected pipe bombs in Washington, D.C., on January 6. If you recognize this backpack or these shoes, submit a tip at https://t.co/buMd8vYXzH. A $50,000 reward is available. @FBIWFO https://t.co/Quaky7ud2X pic.twitter.com/ivJJwoWERr

As large crowds stormed the U.S. Capitol on Wednesday, federal agents were working at the same time to detonate two pipe bombs found just blocks away at the offices of the Republican and Democratic national committees.

At approximately 1 p.m. on Jan. 6, multiple law enforcement agencies received reports of a suspected pipe bomb with wires at the headquarters of the Republican National Committee (RNC) located at 310 First St. Southeast in Washington, D.C., the FBI said in its press statement. About 15 minutes later a second suspected pipe bomb with similar descriptors was reported at the headquarters of the Democratic National Committee (DNC) at 430 South Capitol St. Southeast #3.

An explosive device is shown outside of the Republican National Committee office, Wednesday, Jan. 6, 2021, in D.C. (AP Photo)

The two explosive devices were very similar, and both were about a foot long with end caps and wiring that appeared to be attached to a timer, law enforcement officials familiar with the matter told the Associated Press.

Investigators are still examining the devices and their components to determine the specific compounds inside the pipe bombs, but they both appeared to contain an unknown powder and some metal, the officials said.

Meanwhile, an Alabama man was taken into custody after a M4 rifle, loaded magazines, and 11 Molotov cocktails were found in his truck during the riots, Law Officer reported.

Nevertheless, authorities said the man, identified as Lonnie Coffman, is not suspected of leaving the explosive devices at the Republican and Democratic national committee offices.