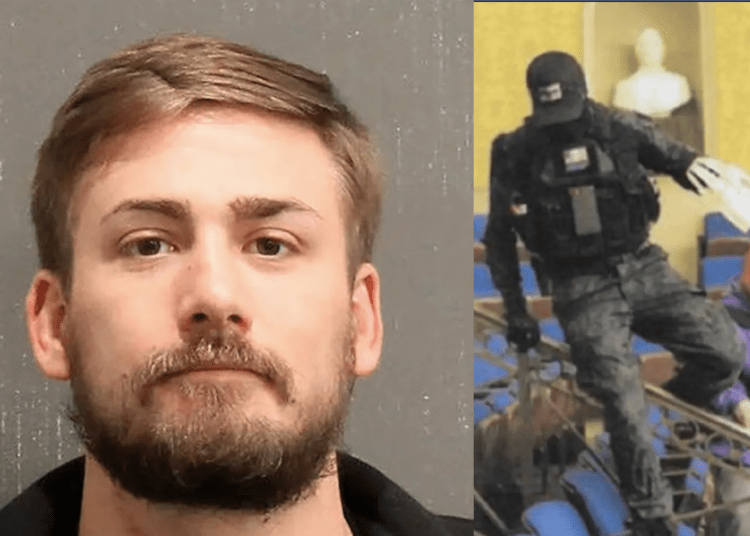 Eric Munchel, 30, is believed to be a man photographed carrying zip ties into the Senate Chamber during last week's riot at the Capitol building, the FBI said. (Metro Government of Nashville and Davidson County/Justice Department )

WASHINGTON — A Tennessee man believed to be a protester who stormed into the U.S. Capitol last week and entered the Senate Chamber with plastic restraints was ordered held in police custody Monday.

Online sleuths accused Munchel, who was dubbed the “zip tie guy,” of being one of two men who carried the restraints into the Capitol building on Jan. 6 amid a chaos, Fox reported.

As a result, Munchel faces charges of knowingly entering or remaining in a restricted building on grounds without lawful authority, and one count of violent entry and disorderly conduct on Capitol grounds, according to reports.

Eric Munchel, 30, is believed to be a man photographed carrying zip ties into the Senate Chamber during last week’s riot at the Capitol building, the FBI said. (Justice Department)

Prosecutors asked that he remain in custody pending extradition to Washington D.C.

The FBI said photos of someone believed to be Munchel was carrying the restraints, an item in a holster on his right hip and a cellphone mounted to his chest with a camera facing outward.

“In my experience, flex cuffs are used by law enforcement to restrain and/or detain subjects,” FBI agent Carlos Fontanez wrote in an affidavit.

However, Munchel has not been charged with a crime connected to using the zip ties.

When authorities encountered Munchel at a hotel in Washington D.C., on the day of the attack, they observed him carrying a “Taser Pulse,” which emits electrical shock. According to authorities, he said he had it for self-protection at the Trump rally that preceded the siege at the Capitol.

A hearing on Munchel’s case is scheduled for Tuesday.

“I want to remind you that it’s very important that you communicate with them (attorneys) about your case. You need to speak openly and freely with them,” U.S. Magistrate Judge Chip Frensley told him, according to the newspaper. “You don’t talk to them and communicate with them, it’s real hard for them to represent you. We have challenges in the COVID era, and they’re going to work through those things, and I need to work with them so that they can do everything they can to represent you.”