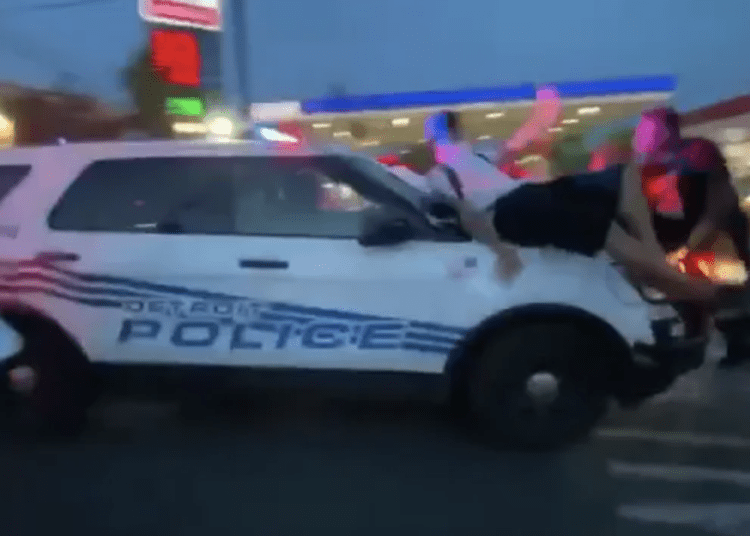 Chaotic scene as protesters swarmed a police unit. The officers accelerated away after a rear window was smashed, leading them to believe danger was present. (Facebook)

Detroit — The American Civil Liberties Union and Detroit Will Breathe are suing the Detroit Police Department over its response to protests in the city since May. As a result, the city is countersuing, claiming the gatherings amounted to a conspiracy for which any damages should be paid by demonstrators.

Protesters who were injured by police filed a lawsuit in late August alleging that their First Amendment free speech rights were violated, reported The Detroit News.

In October, the city filed a counterclaim, attempting to hold Detroit Will Breathe and protesters liable for civil conspiracy. Police argue that the protest organizers are responsible for paying for any damages that resulted from protesters’ actions.

Last week, Detroit Will Breathe moved to dismiss the claim, saying it is without merit. On Friday, the ACLU of Michigan filed an amicus brief saying the counterclaim should be dismissed.

Following the deaths of George Floyd and Breonna Taylor, Detroit Will Breathe has been marching in Detroit for more than 150 days.

Over that time, officers and protesters have skirmished, resulting in dozens of arrests of protesters and police use of tear gas, zip ties and the use of riot gear. In one instance, a police car drove through a group of protesters.

Police say the officers in the area were trying to redirect the marching protesters along a faster route back to the park where the rally was held earlier in the day. The scene, they say, escalated after one of the protesters busted out the cruiser’s back window.

“There is this loud crash or bang to the rear of the police car. And again in their mind, as according to our investigation, they believed they could be shot at, or were being fired upon and because of that they had to take quick, evasive action,” Police Chief James Craig told reporters (at the time). “When you talk about training, if you run into an ambush situation the proper course is to get out for your safety and that is exactly what these officers opted to do.”

He also said there were “repeated efforts by at least some of the 25 to 30 (protesters) to gain access to the inside of the car where the officers were located.”

During the protests, people have denounced the police, called for Chief Craig’s resignation and spoken out against police violence and racism. ACLU senior staff attorney Phil Mayor said that’s not enough to hold organizers liable.

“What Detroit Will Breathe has said is protected speech; they’re exercising their right of dissent, their right to express their dissatisfaction with the current state of politics and policing in Detroit,” Mayor said. “The city’s attempt to hold them liable for individual acts at the protest that weren’t committed by the individual protesters who are in a lawsuit is an attempt to suppress their speech.

“It’s an attempt to manipulate the judicial process to do what police violence in the streets could not, which is to silence protesters,” he said.

Following the fatal police shooting in July of Hakim Littleton, a coalition called on Detroit police to release video footage and returned to the scene on the city’s east side.

Littleton was killed after video showed he aimed a pistol about 2 feet from a police officer’s face and fired two shots, missing the officer. Police returned fire. Police officials said the 20-year-old was pronounced dead in an area hospital, Law Officer reported.

“It’s simply a miracle he wasn’t struck in the head,” Craig said about the officer, who was unharmed.

Hours after the incident, with an unruly crowd throwing objects at officers at the shooting site at McNichols near San Juan, Craig released video of the Littleton incident, saying it showed officers were forced to shoot because their lives were in danger.

A dozen people were arrested and some hospitalized, including organizers who said they received head lacerations and were injured due to police use of force, reported The Detroit News.

A federal judge in Detroit denied a motion in September by the city of Detroit and  the Police Department to ban some Detroit Will Breathe protest activities they said are violent.

The judge added that the city and the department “lack a factual basis” for their motion.

Police have alleged police officers were hit by projectiles and bottle rockets during recent demonstrations and that officers “had lasers pointed in their eyes, and were attacked by protesters” before the judge issued a temporary restraining order.

According to the suit, the city’s counterclaim is based on Detroit Will Breathe’s social media posts they say incited violence and protests. The posts included a tweet urging people to gather to protest the police killing of Littleton; an Instagram post complaining about the City Council not enacting a resolution in support of protesters and statements urging the ouster of Craig, assailing his leadership and trustworthiness.

“I continue to stand by the Detroit Police Department’s actions,” Craig told The Detroit News on Friday. “We’re investigating any claims of wrongdoing and will continue to do that.”