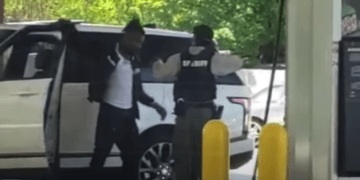 VIDEO: Non-compliant NFL player forces deputy to pull firearm to get him into custody

VIDEO: Non-compliant NFL player forces deputy to pull firearm to get him into custody 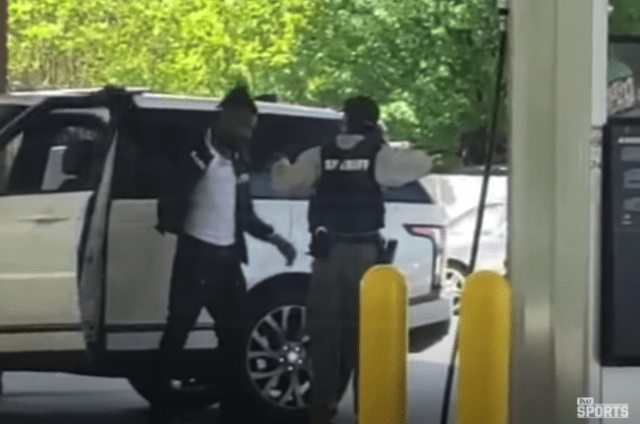 A non-compliant man who plays in the NFL forces a South Carolina deputy to pull his firearm in order to get him into custody. (YouTube)

In footage obtained by TMZ Sports on Friday, a York County Sheriff’s Office deputy is seen arresting Breeland with his firearm drawn. The deputy said Breeland was non-compliant during the arrest, which is apparent after watching the video.

It shows the deputy trying to get Breeland in handcuffs, but the encounter begins to escalate. The deputy threatened to use a Taser on Breeland if he refused to comply. Then, things became more intense as the deputy drew his firearm on the confrontational Chiefs player.

“Let me see your hands! … I’m not playing!” the deputy can be heard shouting.

A woman who is in close proximity to the video is heard providing unfiltered commentary.

“Please just chill,” the woman cautions under her breath. “My heart is beating so fast.”

Breeland was charged with five counts on Tuesday, including resisting arrest; the transport of alcohol with a broken seal in a motor vehicle; open container of beer or wine in a motor vehicle; possession of 28 grams or less of marijuana or 10 grams of hash; and driving without a license.

As people in the public spotlight so often do, Breeland tweeted about his arrest in an apparent attempt to minimize the incident.

“I really was at a gas pump got approach by two guys police pulled up they throw something my car as police pulled up which the cop saw,” Breeland wrote. “I was the one detained wit charges that really shouldn’t be charged.”

Those tweets have since been deleted, according to reports.

“At the time of this encounter with law enforcement, Mr. Breeland was leaving a gas station store after making a lawful purchase. Moments after returning to his vehicle, a 2020 Range Rover with valid temporary paper tags, law enforcement officers approached Mr. Breeland and drew their weapons. We look forward to investigating why this level of force was necessary. Bashaud Breeland is innocent unless proven guilty. We look forward to the truth coming forward.”

Breeland signed a one-year deal with the Chiefs last March and was productive for the Super Bowl champions. He had 48 tackles, two interceptions, two fumble recoveries, eight passes defended, and a defensive touchdown over the course of the regular season. In the Super Bowl victory over the San Francisco 49ers, Breeland had a team-high seven tackles and one interception.

Chiefs head coach Andy Reid says he’s seen the video of Breeland’s arrest and has spoken to him following the incident … but will let law enforcement handle the situation before taking any action, TMZ reported.

Kansas City re-signed Breeland to another one-year deal, but since it is a low-risk contract, the team could part ways with him and his off-the-field issues.