U.S. Olympic Committee says athletes will be allowed to protest without sanctions 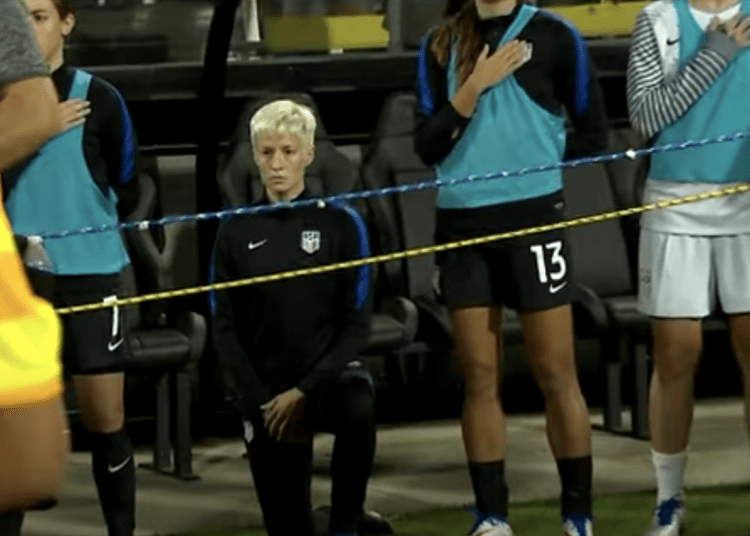 The U.S. Olympic and Paralympic Committee announced on Thursday that athletes will be allowed to “peacefully and respectfully” protest in support of social justice causes without fear of being sanctioned.

In other words, it’s ok to take a knee or walk off the court/podium during the playing of our national anthem. There is nothing “respectful” about that, especially during the Olympic games when athletes should proudly represent their respective countries.

If you hate your country, why represent it? If you are a governing body like the U.S. Olympic Committee, why do you want athletes representing your country who feel the need to protest in this manner? As a viewer, I’d rather watch a patriotic American finish outside the medals podium than a hater of our country taking a knee while the Star Spangled Banner is played.

This is not the time or place to protest, and there is nothing “respectful” about it.

Previous guidelines from the committee prohibited athletes from participating in any “kind of demonstration or political, religious or racial propaganda … in any Olympic sites, venues or other areas.” Those guidelines have now been relaxed, at least for one particular type of political demonstration, The Hill reported.

“First and foremost, it is critical to state unequivocally that human rights are not political, and peaceful calls for equity and equality must not be confused with divisive demonstrations,” USOPC CEO Sarah Hirshland said in a statement.

Hirshland pointed to several Team USA athletes who were reprimanded for protesting, saying the Olympic organization “should have supported instead of condemned, and advocated for understanding instead of relying on previous precedent.” Hirshland then apologized, Daily Wire reported.

“The USOPC’s decision recognizes that Team USA athletes serve as a beacon of inspiration and unity globally, and their voices have and will be a force for good and progress in our society,” Hirshland said in her statement. “In the United States, we need to continue to use the platforms we have available to us to foster discussion, education and action for racial and social justice.”

So now the Colin Kaepernick-wokeness is going to invade the Olympic games. This is the kind of activism that has (unwittingly in most cases) spun into supporting Marxist and Socialist ideologies, oftentimes without understanding the consequences. i.e. anti-government, anti-Christianity, anti-family, anti-traditional values, anti-Bill of Rights, anti-America, etc.

As an avid Olympic enthusiast, I have been waiting for this announcement with trepidation, somehow hoping it would never happen, yet fully expecting it to come to fruition in our present insanity.

I enjoy watching the Olympics so much, that I occasionally took vacation time during my career to simply sit at home and consume the games, day and night.

Now I feel awful about what will transpire. American athletes symbolically spitting on our flag and flipping the bird to our nation as they have a medal placed around their neck. Many of them claim it means something entirely different, but I don’t buy it for a second. The brainwashing has been successful. People making this argument are completely ignorant about U.S. history and their propaganda has divided our families, our neighborhoods, our communities, and our nation.

Sports leagues that have allowed the kind of social justice protests the Olympic committee will now support have lost millions of viewers in 2020. The NBA’s ratings dropped significantly after the association began allowing athletes to wear approved social justice messages on their jerseys, The Daily Wire’s Amanda Prestigiacomo previously reported:

In addition to obstacles presented by the coronavirus, a report from City Journal outlined the staggering ratings hit of the NBA because of its left-wing activism, most recently wearing social justice-themed warmups and jerseys and even postponing playoff games over the police shooting of Jacob Blake.

“Americans have been falling progressively out of love with the NBA, for instance, and the pandemic has only exacerbated an already difficult situation,” the report says. “TV ratings, mediocre after the season restarted, are down collectively by 40 percent on the TNT network, and 20 percent on ESPN, since their peak nearly a decade ago.”

The report noted that the NBA’s “network TV premium broadcasts ratings on ABC are off by 45 percent,” which “a former public relations executive for the NBA describes as a ‘cratering’ of viewership,” per The Athletic.

Yet allowing athletes to protest their perceptions of injustice at the Olympic games is far more detrimental than bad ratings. It’s making a political statement on an international stage saying, “America is screwed up by the numbers.” That simply is not true. People are flawed, but our system of governance is “top shelf.”

While our form of government, our Constitution, our way of life is unparalleled, there is no shortage of individuals who corrupt and compromise our greatness. Now we’ll have individual athletes that will mute the chants of “USA, USA, USA,” during the Olympics games because they don’t understand what made America great. It was people standing up for what’s right, not passively taking a knee as a form of disapproval.