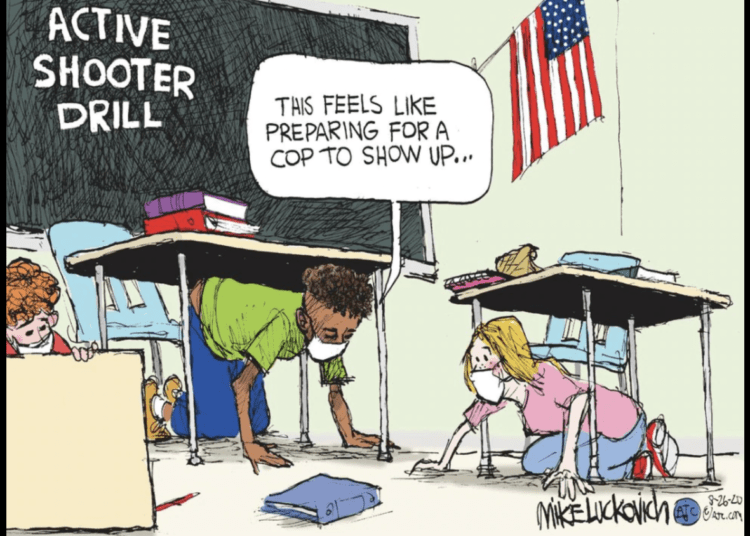 Newspapers around the nation are appropriately facing fierce outrage after publishing a highly offensive and irresponsible editorial cartoon that compared police officers to school shooters.

The cartoon depicts a pair of students, one Black and one White, hiding beneath classroom desks next to a chalkboard that read, “Active Shooter drill.” In the cartoon, the Black student says, “This feels like preparing for a cop to show up.”

Mike Luckovich, the editorial cartoonist for the Atlanta Journal-Constitution, sketched the cartoon and a syndicated version appeared in newspapers around the nation, Todd Starnes reported.

As a result of the vexing sketch, readers unleashed on several social media platforms.

“Actually, this cartoon should be offensive to everyone. Not only our law enforcement officers that risk their lives daily to keep others safe, but to blacks as well. What kind of family are you implying this black child is from? You should be ashamed contributing to the divisiveness of our country,” wrote one angry reader.

The Lewiston Tribune reports that its office was inundated with angry calls, emails and more than four dozen subscription cancellations.

“We regret Wednesday’s Opinion page cartoon. We made a judgment error and failed to anticipate the impact the cartoon would have locally, and the negative reaction it would elicit,” publisher Nathan Alford wrote in an apology to readers and to law enforcement, according to Starnes.

The Laconia Daily Sun in New Hampshire said they received “an earful” from readers who were offended by the cartoon.

“We’ve received complaints about cartoons before, though not to this extent, and the public’s response to this one has rekindled a conversation that has been going at The Daily Sun for more than a year: the value of running such cartoons at all,” they wrote.

Furthermore, Luckovich received a lot of criticism on his personal Facebook page.

“Wow. I’ve been a Luckovich fan for a long time, but this is disappointing,” wrote one respondent.

“You’re trash along with your paper!” said another.

So, news organizations simply get to offer an apology for an egregious error in judgment. By contrast, these same organizations demand that police officers get incarcerated when they make a mistake; and with greater frequency they are indeed getting thrown in jail for things that go woefully wrong as they try to keep the peace in an evermore hostile culture.

If only the job of policing were as easy as writing about it, we’d all be much happier!