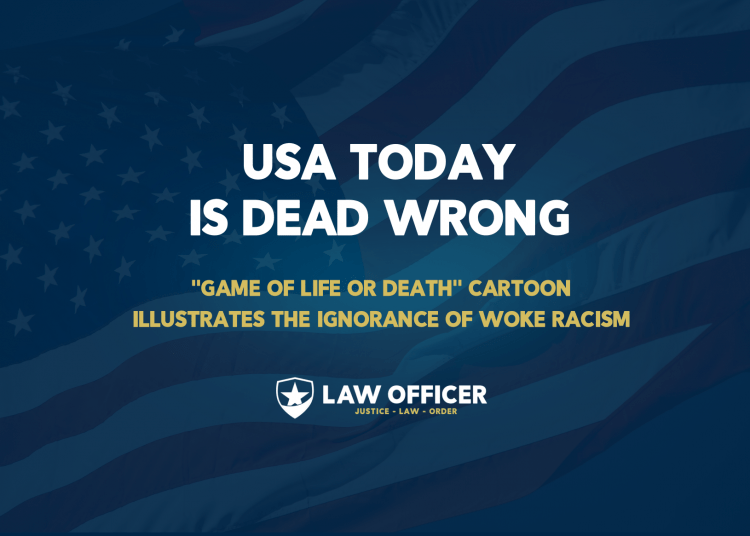 Its official. USA Today is no longer a newspaper, but a propaganda platform for pushing ignorance and racial prejudice throughout America. A cartoon published by USA Today is absolutely nothing to laugh it. It illustrates the ignorance and black/white racial prejudice that has become a hallmark of woke racism. It clearly ignores the violence that police officers must face from suspects—both “black” and “white” and criminals of every kind.

The cartoon by Mike Thompson and published by the USA Today Network spoofs the board game LIFE—and repulsively spits in the face of every officer who has suffered violence—or sacrificed their lives—on the streets and by the side of highways throughout America.

A diagram of the wokely ignorant and racially prejudiced cartoon appears below. 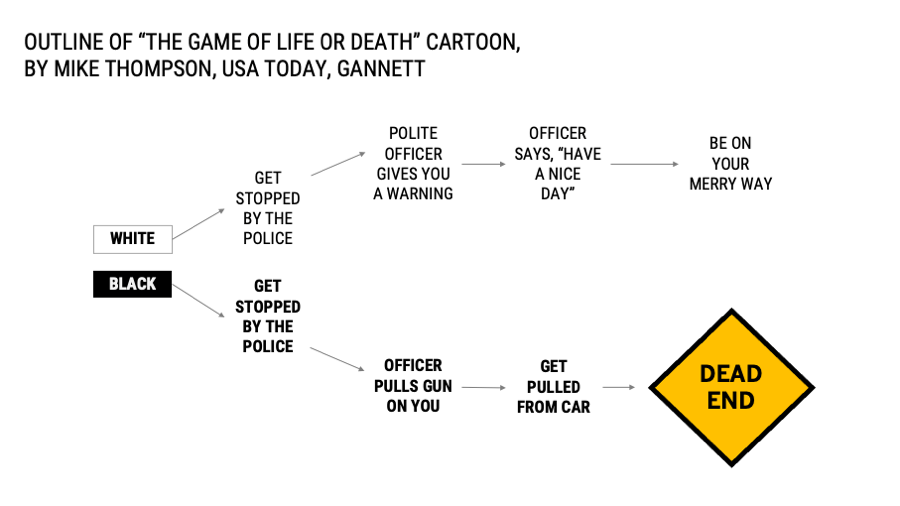 The illustrator, various editors, and others involved in USA Today publications surely had to recognize they hurt and harm this illustration could cause before syndicating it across the country.

And they should have recognized how this only illustrates what we have been saying for years:

This is all a lie—one that the media and politicians need to continue to stay relevant, despite the facts.

Coincidentally, the woke-minded allies of the USA Today at The Washington Post have all but proven the lie with their very own data regarding officer-involved shootings.

The Washington Post database indicates that In the last five years, 24% of people who were shot by police were “African Americans”—but more than twice that many were “white.” And no delusions of “racial disparity” can change these basic numerical facts.

Yet in their ignorance of facts, civility, and common sense, USA Today has chosen to illustrate that “blacks” are treated differently than “whites” in traffic stops—as though criminal behavior has nothing to do with the circumstance. And even just to underscore their ignorance, the same data shows that out of the “unarmed” people shot by the police 2 percent were “black”—while 3 percent were “white.”

We don’t expect any of the fake news machines to spend even a moment looking at the data. But we do expect civility. It is atrocious that a major newspaper distributes what can only be described as hate speech and racial prejudice to the American public.

We wonder what the families of the following law enforcement officers think about this illustration and of USA Today:

Each one of these heroes were murdered in cold blood on a traffic stop in 2021. The same type of traffic stop that USA Today so appallingly portrayed.

The staff of USA Today may think their audience is stupid. But America knows better, and will not stand for this baseless racial bigotry.

On behalf of law enforcement officers throughout America—especially the ones who have lost their lives during traffic stops—we demand an immediate retraction of this cartoon along with an official apology from Mike Thompson, USA Today, and Gannett.

Please speak out and demand a retraction from USA Today.

RE: Retraction of "The Game of Life" Cartoon