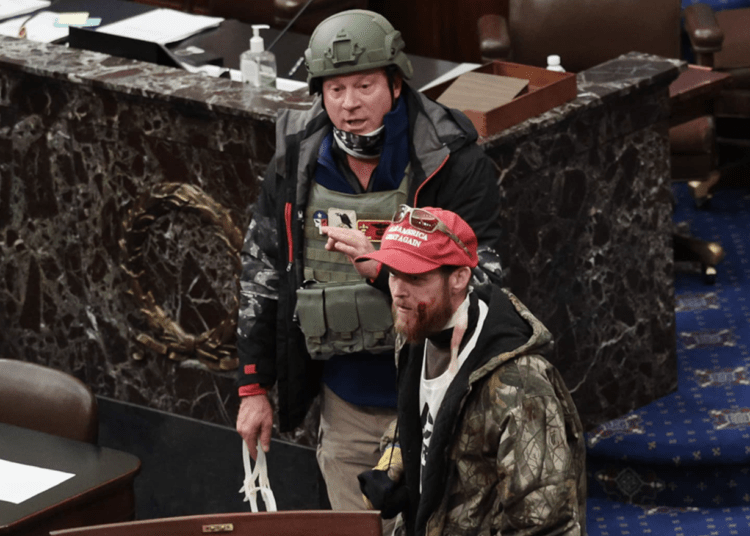 Larry Brock Jr. has been identified wearing a helmet on the Senate floor as people stormed the U.S. Capitol building Wednesday after mass demonstrations. (Photo by Win McNamee via Fox News)

UPDATE: A retired Air Force officer who was arrested after he was filmed participating in the U.S. Capitol siege in military gear was turned in by his ex-wife, authorities said.

Larry Rendell Brock, of Grapevine, Texas, was charged with knowingly entering or remaining in a restricted building and violent entry and disorderly conduct. He turned himself into FBI agents on Sunday.

His ex-wife, whom he was married to for 18 years, called the FBI National Threat Operations Center to report she recognized him in photos taken inside the Capitol during the deadly Jan. 6 riot, Fox News reported.

“I just know that when I saw this was happening I was afraid he would be there,” she said, according to a federal affidavit. “I think you already know he was there. It is such a good picture of him and I recognize his patch.”

WASHINGTON — A retired lieutenant colonel in the Air Force Reserves was identified as one of the participants who overwhelmed police while invading the nation’s Capitol Wednesday.

Larry R. Brock Jr. confirmed to the New Yorker on Friday that he was the man pictured wearing a helmet and military gear on the Senate floor, after Trump supporters forced their way into the building, disrupting a joint congressional hearing to certify the Electoral College results of the presidential election.

“The president asked for his supporters to be there to attend, and I felt like it was important, because of how much I love this country, to actually be there,” Brock told the New Yorker, adding that he intended to do so peacefully.

According to the New Yorker, Brock is a graduate of the Air Force Academy and a combat veteran.

“As a private citizen, we no longer have jurisdiction over him,” the Air Force said in a statement to Fox News.

Brock, 53, a father of three, said he wore tactical gear because he was afraid of getting injured by counter-protesters such as “BLM or Antifa.” He found the zip-ties on the floor and picked them up, intending to give them to a police officer if he encountered one, the New Yorker reported.

“I know it looks menacing,” he said, adding that he neither knew of nor supported the vandalism and destruction at the Capitol — which included broken windows and stolen historic relics. “That was not my intent.”

The FBI continues working to identify individuals photographed in the melee at the Capitol, which left five people dead, including a Capitol police officer, and dozens more injured.

Thus far, authorities have charged at least 13 people in federal court in relation to the chaos.