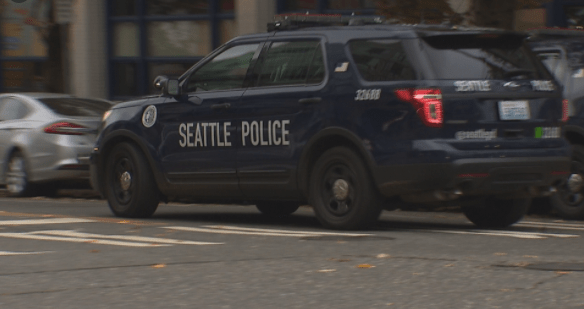 SEATTLE — At least two Seattle police officers who were in Washington, D.C., on Wednesday during the siege at the U.S. Capitol have been placed on administrative leave, according to a statement from interim Police Chief Adrian Diaz.

“The Department fully supports all lawful expressions of First Amendment freedom of speech, but the violent mob and events that unfolded at the U.S. Capitol were unlawful and resulted in the death of another police officer,” Diaz said in the statement. “… If any SPD officers were directly involved in the insurrection at the U.S. Capitol, I will immediately terminate them.”

The city’s Office of Police Accountability (OPA) is investigating whether any department policies were violated and will conduct a “full review of any SPD employee activities at the U.S. Capitol.”

Officer Valerie Carson, a spokesperson for SPD, said Friday night the officers were not on duty while they were in D.C. The department did not release any other information about the officers and Carson referred further questions to OPA, according to the Seattle Times.

“We learned about this in an email last night,” Myerberg said in a phone interview. “There’s a picture that circulated on social media of the two officers at the protest rally. So, yes, we believe they were there, but we don’t know all the facts yet, so that’s why we’re doing the investigation.”

The OPA will try to determine “what role the officers played” at the D.C. protests, including whether they participated with the mob in the deadly riot that breached the Capitol, he said.

“The fundamental question will be, ‘Is being present at the rally in and of itself a violation of department policy?’” Myerberg said. “And I just don’t know that yet. I think it really depends on what they did and what their role was in those events.”