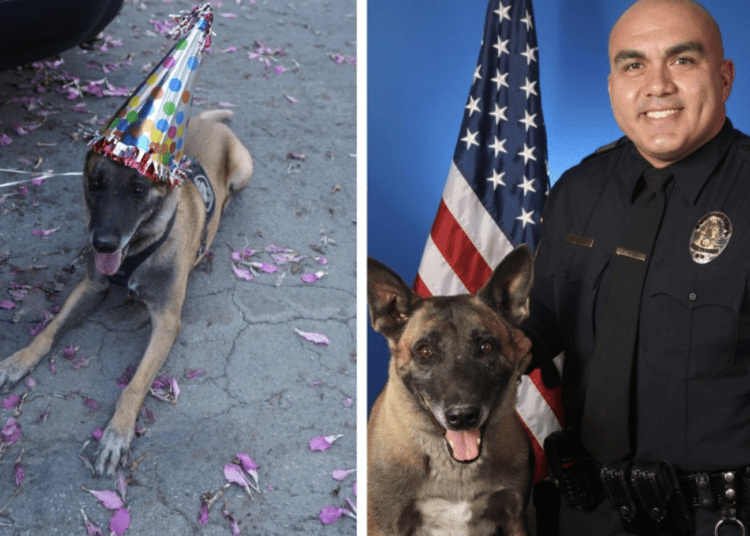 POMONA, Calif. — A six-year police career filled with plenty of apprehensions will now include a happy homecoming, too.

The Pomona Police Department on Tuesday announced the retirement of K9 Sarge, a 7-year-old Belgian Malinois. The department tweeted out a photo of Sarge’s retirement party Saturday, the day of his last official shift.

Sarge was purchased by the city of Pomona six years ago and trained by Cpl. Joe Hernandez, an 18-year veteran and Inland Empire resident, Los Angeles Times reported.

“Canines have always been a passion of mine, and to be part of the K9 unit is very adventurous,” said Hernandez, 38.

The officer loved working with Sarge so much that he adopted his partner, who has already been living with the Hernandez family. The Pomona City Council formally approved the retirement and adoption of Sarge at Monday’s regular meeting.

“I spend a minimum of 10 hours a day with the dog, and when you do that, you build a strong bond and loyalty,” Hernandez said. “I had first right of refusal, and it was an easy choice to bring Sarge home.”

Thank you for your service, Sarge! We hope your compensation package includes a lifetime of belly rubs and biscuits!

The dog was bred in Europe before coming to the U.S. to work as a police service dog (PSD).

Over his six years with the department, Sarge was very active, with 54 “finds,” meaning he found the suspects, and they surrendered without incident. Sarge, however, also tallied 21 apprehensions in which suspects refused to surrender, with some fleeing and others hiding.

One of Hernandez’s fondest memories from Sarge’s career came in 2018, when a suspect rammed a Glendora Police Department’s K9 vehicle, reported the Times. The dog in that car, a bloodhound, and Sarge helped find the driver, who fled on foot and was hiding in the closet of a motor home.

“What we ask these dogs to do, other officers would look at you twice,” Hernandez said. “They’re fearless and loyal, and I trust Sarge more than I trust a lot of people.”