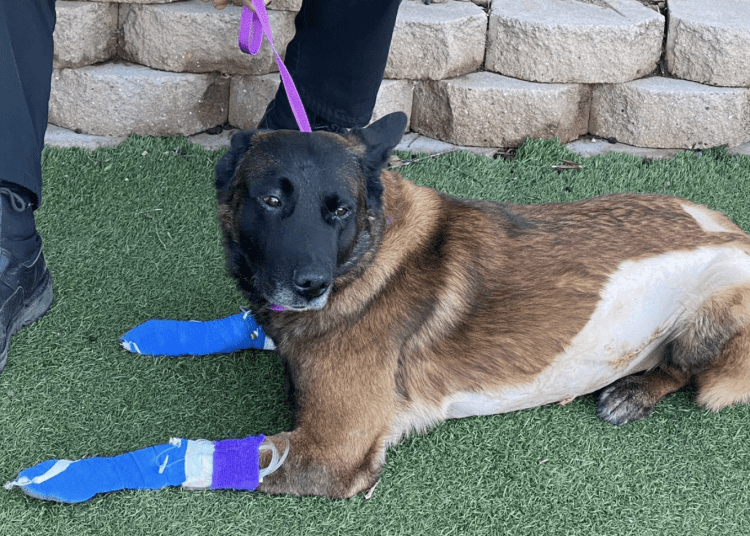 SAN DIEGO — San Diego police K9 Titan was recovering Tuesday after a suspect stabbed him during an altercation with officers, according to police.

Two officers responded to a radio call of a man trespassing at a business at about 11:30 a.m. Tuesday, KSWB in San Diego reported. The man, later identified as Dedrick Darnell Jones, refused to provide his information and punched the officers before fleeing, according to police.

Jones, 35, then reportedly entered military property at 2500 Midway Drive where police said he stood on a shipping container brandishing a knife for about four hours.

Emergency negotiators managed to get Jones to come down, but officers said he “still refused to put the knife down.”

A K9 handler deployed Titan. During the apprehension, Jones fought back and stabbed the police service dog, the agency said in a tweet.

As a result, K9 Titan suffered stab wounds to his side, lacerating his colon in three places, police said. He was rushed to a local animal hospital where 6 to 8 inches of Titan’s colon was surgically removed, requiring more than 100 stitches, according to the department.

Consequently, Jones was arrested and booked at the San Diego Central Jail. According to KSWB, he could face four felony charges and a misdemeanor, including harming a police service dog and obstructing and resisting an officer, officials said. His bond was set at $50,000.

Titan was “on the road to recovery,” the department said Tuesday.

“He’s a brave boy!” police said on Twitter. “We’ll keep you updated on Titan’s condition and please keep him in your thoughts as he has a long road to recovery.”