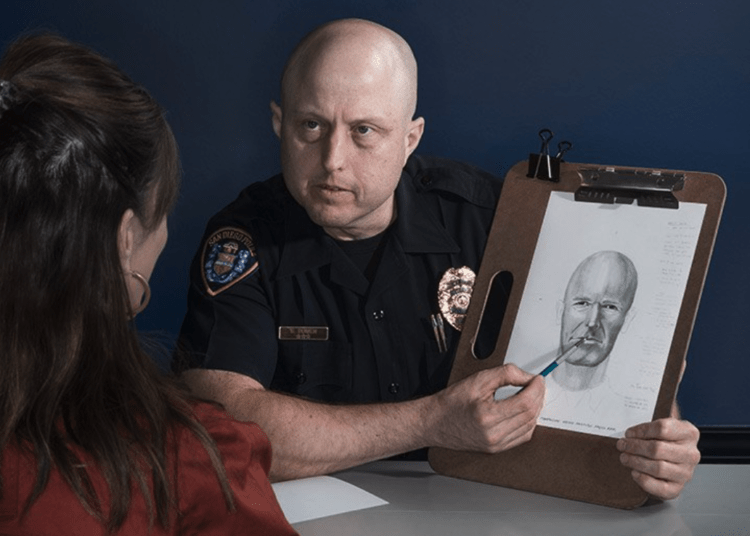 SAN DIEGO — A San Diego police officer who was a uniquely talented forensic artist unexpectedly passed away earlier this month. He was honored during a Thursday memorial service for his dedication as a public servant.

Gary Bowen was not only a San Diego police officer, but previously served as U.S. Navy corpsman alongside his Marine Corps peers. He was 49 years old when he died on Jan. 12.

The San Diego Police Department said Bowen suffered from “medical complications” but did not provide further details, according to FOX 5 San Diego.

Following a service at North Coast Church in Vista, Bowen was laid to rest at the Miramar National Cemetery.

Bowen was a police veteran of more than 24 years. He most recently worked on SDPD’s homeless outreach team.

Bowen was hired in 1998, and after more than a decade as a patrol officer, he was growing frustrated with the quality of SDPD’s computer-generated composite sketches. Since he believed he could improve the department’s capacity in this area, he set out to make better sketches himself, attending 120 hours of training at his own expense, FOX 5 reported.

After completing the certification process, he started producing sketches professionally, basing the renderings on descriptions provided by victims and witnesses.

As a result, his sketches played an instrumental role in identifying suspects in about 100 cases, according to the department.

Bowen was one of just two police sketch artists in San Diego County. His work was frequently seen in Crime Stopper bulletins.

Beyond Bowen’s skill with the pencil, he had to learn how to best coax out a useful description from victims and witness.

The highly valued officer often dealt with victims who were “distraught, angry, sobbing or yelling.” But Bowen would remain patient during the sometimes hours-long interviews, knowing an accurate composite could help bring someone to justice, the San Diego Union-Tribune reported.

Chief David Nisleit of the San Diego Police Department spoke at Thursday’s memorial. As he fondly remembered the public servant, he said Bowen “embodied the very spirit of service, and loved and respected everybody.”

Known to be a talented problem-solver, Bowen is already deeply missed by his loved ones and colleagues, Nisleit said.

“If you talk to anybody who knows Gary, you’ll hear the words — the common words — to describe him,” the chief said. “Honorable, dependable, skilled, compassionate and helpful.”

Bowen is survived by his wife, Monica, and their two sons, Trevor and Alex. San Diego’s police union shared a fundraising campaign with proceeds going to the family.