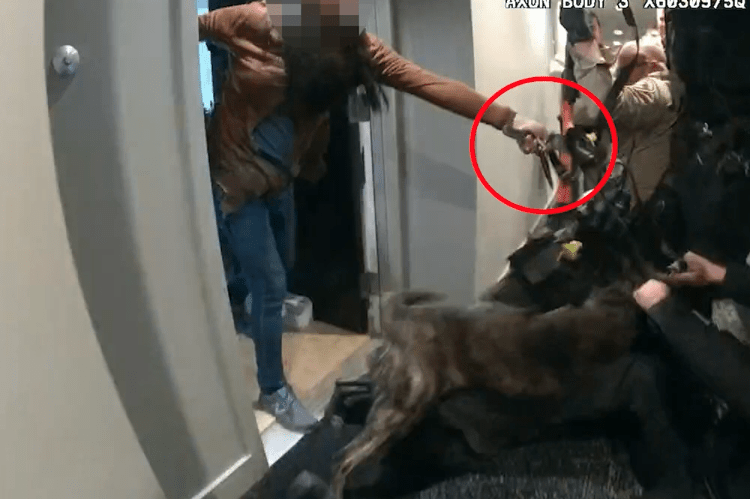 SAN DIEGO COUNTY, Calif. – The San Diego County Sheriff’s Department on Friday released footage of deputies fatally shooting a woman last week inside a Little Italy condo complex after she stabbed a deputy during the service of an eviction notice.

The bodycam footage shows the moment a San Diego woman was fired upon by law enforcement personnel after she went berserk and stabbed a deputy.

The video shows Deputy Jason Bunch knocking on the door of Yan Li’s condominium on March 3.

“Here’s a notice to evict,” Bunch tells Li, 47, who is seen holding a large knife at her side, the San Diego Union Tribune reported.

The resident of Acqua Vista Condominiums yells back: “How could I know you are not intruder?”

As he points his gun at the Li, the deputy continues to order her to put down her weapon.

“Put the gun down, ma’am, I’m gonna shoot you! Put the f—- gun down,” he yells as she accuses him of being a fake officer while throwing the papers to the ground and slamming the door.

Later in the redacted video, a sheriff’s sergeant issues commands to Li behind her closed door as she continues to demonstrably yell from inside, the New York Post reported.

Authorities discovered that Li had also threatened the manager of the complex as well as a maintenance worker with a knife the day prior, according to the San Diego Union-Tribune.

“Based on this reported crime, there was a threat to public safety,” law enforcement personnel concluded. “This is also probable cause to arrest Li for assault with a deadly weapon.”

As the footage continues, police enter the woman’s condo using a key. Once they make entry and confront the unhinged woman, a deputy advises others that he is deploying “bean bag” munitions.

Nevertheless, Li proceeds to charge at the deputies and they retreat to the hallway. This creates a cluster and several personnel fall to the floor.

During the process one officer is stabbed and Li is fired upon by four different officers. She then falls to the floor and died.

The sheriff’s department has not identified the wounded deputy who was reportedly stabbed in the chest. He was treated at UC San Diego Medical Center and released later that day.