K9 Hondo was rushed to a local veterinary hospital for treatment 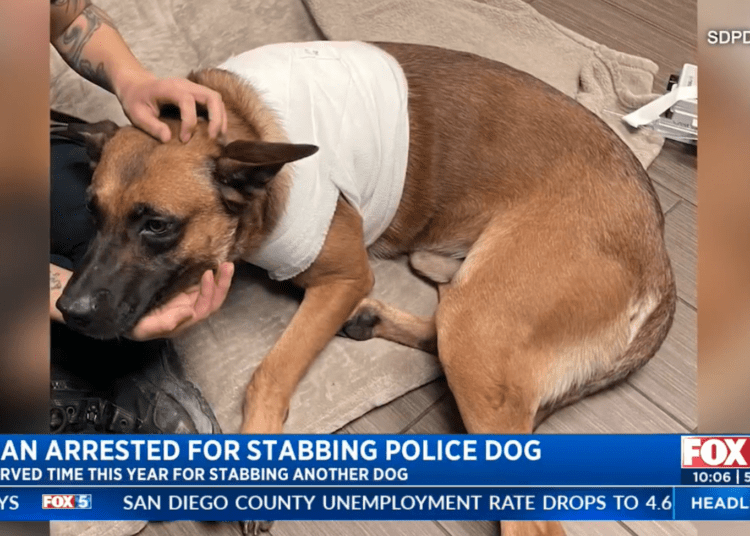 SAN DIEGO – A man previously sentenced in January to a year in custody for stabbing a San Diego police service dog (PSD) was arrested again Friday after authorities say he stabbed another K9 in the line of duty.

“The officers were dispatched to the 3700 block of Riley Street, where they saw Jones swinging a knife,” the lieutenant said. “Despite officers’ efforts to de-escalate the situation, Jones refused to cooperate and climbed onto a parked car, FOX 5 San Diego reported.

“Jones eventually stepped down and came towards officers while still armed with the knife,” Sharki added.

K9 Hondo was deployed and stabbed twice before officers were able take Jones into custody as he remained armed with the knife, Sharki said.

Hondo was rushed for treatment to a local San Diego veterinary hospital. He is expected to survive, according to the department.

In January, Jones stabbed K9 Titan during an hours-long standoff, Sharki said. During the showdown, Jones was armed with two knives, according to FOX 5 reported.

“K9 Titan received 100 stitches, had part of his colon removed, and endured weeks of recovery,” the lieutenant said.

As a result of the knife attack on K9 Titan, Jones pleaded guilty to felony animal cruelty and assault on a peace officer. Although he was sentenced to one year in jail, he was released in June based on jail credits that reduce custodial time.

However, Jones was on probation when he attacked K9 Hondo on Friday, the lieutenant confirmed.

“Our system must do a better job holding violent offenders accountable,” Police Chief David Nisleit said. “It is ironic and tragic that the man who had the gall to stab a police dog in January committed the same crime just months later.”

Jone remained in custody after Friday’s attack on K9 Hondo. His bail was set at $50,000, according to online jail records. He is scheduled for arraignment on Tuesday.