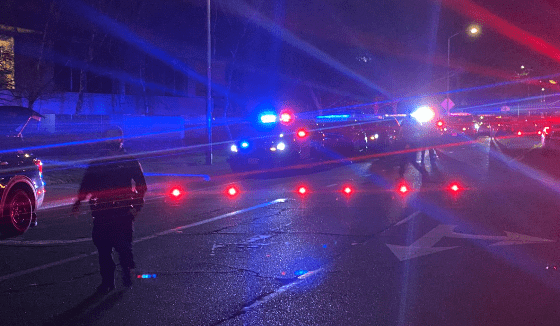 A Sacramento County Sheriff's deputy and department K9 were killed in a gun battle with a suspect who also died late Monday night. (Twitter)

SACRAMENTO, Calif. — A sheriff’s deputy, a department K9, and a gunman were all killed in a shootout late Monday night after a brief chase, which ended at the Cal Expo grounds, the Sacramento Sheriff’s Department said. The deputy was not identified but worked with the department for six years.

Another deputy has been hospitalized in stable condition, the office said on Tuesday.

Around 10 p.m. Monday, deputies tried pulling over a driver, who Sheriff Scott Jones said was a parolee. The driver initially stopped, but then took off in his vehicle — prompting a chase, the sheriff said. The suspect eventually crashed his car, ending the chase on the Cal Expo grounds near the horse track, KCRA reported.

The sheriff said the suspect refused to comply with commands to roll down his windows or exit his vehicle.

Deputies and backup officers then devised a plan, Jones said, to deploy less-lethal force and shot out the suspect’s back window, but the suspect still did not comply with commands to surrender.

At that point, deputies deployed a K9, and the suspect immediately opened fire, killing the dog. The suspect then continued firing shots at deputies, Jones said.

As a result, multiple deputies returned gunfire, according to Jones.

In the shootout with the suspect, the veteran deputy and K9 were killed. Sheriff Jones said the deputy leaves behind a wife and an infant.

“They all take a vow. They all take an oath. They all are ready to lay down their lives so people can sleep in peace,” Jones said. “We never want to have to make good on that promise, and tonight, unfortunately, one young deputy did.”

The suspect, identified only as a man in his 40s, was also killed in the gun battle.

#BREAKING @sacsheriff Scott Jones says a deputy and a K-9 unit(dog) were shot and killed, another officer was shot and wounded after a chase in Arden Arcade area that ended at the #calexpo grounds near the horse track. Suspect shot and killed by deputies. More on @kcranews at 4am pic.twitter.com/8gBs0LH7LV

Additional details regarding the K9 that was killed were not available at the time of publication.