The mass shooting is reportedly related to domestic violence 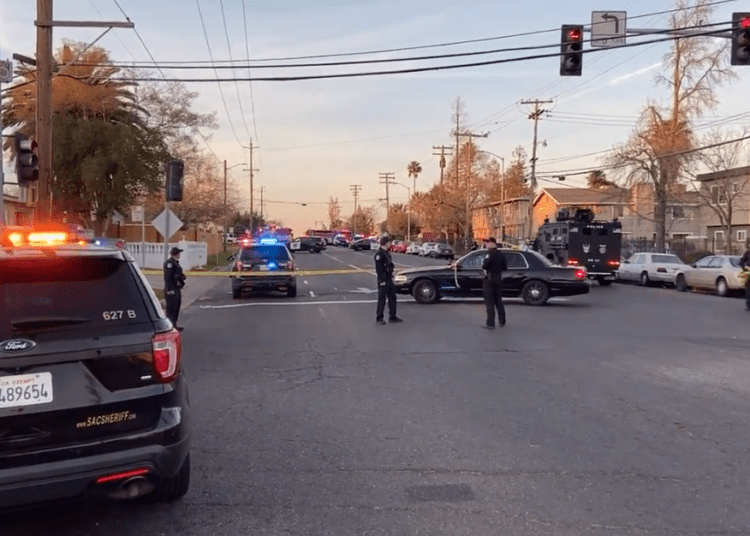 Four people were murdered before the gunman shot and killed himself at a church in Sacramento. (Twitter)

SACRAMENTO, Calif. – Five people are dead , including the gunman, after a mass shooting at a church in Sacramento on Monday, police said.

The suspect gunned down three kids and one adult about 5 p.m. at an Arden-Arcade neighborhood church in California’s capitol city before turning the gun on himself, Fox News reported.

Each person who was shot was pronounced dead at the scene. Their identities have not been released. Authorities believe the mass murder-suicide was domestic violence-related.

The three murdered children were all girls, ages 9, 10 and 13, according to Sgt. Rodney Grassmann, a spokesman for the Sacramento County Sheriff’s Office, Fox 2 of Sacramento reported.

A church employee heard the gunshots and called 911. The shooting occurred in the main sanctuary area, Grassmann said.

Howe and Ethan and Howe and Cottage have a large police presence due to a shooting , please avoid the area. The Sheriffs Office PIO will be at the command Post located at the Home Depot on Howe and cottage.

Breaking: Police are responding to reports of a shooting at a church in the Arden area of Sacramento, California. pic.twitter.com/2EX6TXPrsL

The sheriff’s office said the shooter was the 39-year-old father to the children. He had a restraining order against him and the incident occurred during a supervised visit with his children at the house of worship, where they would often meet, Fox reported.

#BREAKING: @sacsheriff said the father had a restraining order against him. It was a supervised visit with his kids at the church. They often meet there. The mother of the 3 kids has been notified. He was not supposed to have a gun.

The adult killed in the rampage was supervising the visit between the father and his children, according to Sheriff Scott Jones. It is unknown if that was a social worker or church representative.

BREAKING NEWS: @sacsheriff deputies responding to a shooting a church on Wyda Way in the Arden-Arcade neighborhood. There is a massive sheriff and police presence there right now. @van_tieu is on the scene and photojournalist Miguel Cano pic.twitter.com/VFBCNfe76z

The mother of the children was not present when the murders occurred.

A church district leader confirmed the underage victims were the suspect’s daughters, and the shooter may have suffered from a form of mental illness, according to a tweet from James Queally, a Los Angeles Times reporter.

A district leader for the church tells me the victims were the shooter's three daughters and that the shooter may have suffered from a form of mental illness. Understandably, he did not want to talk much beyond that tonight.

The church sits on a mostly residential block near a commercial area east of downtown Sacramento. It wasn’t immediately known how many people were at the church at the time of the homicides, Fox 2 reported.

The church caters to English, Chinese and Spanish worshippers, according to its website. No events for Monday were listed on its online calendar.