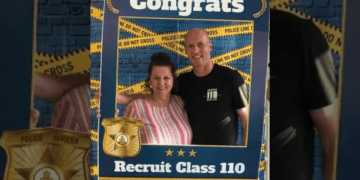 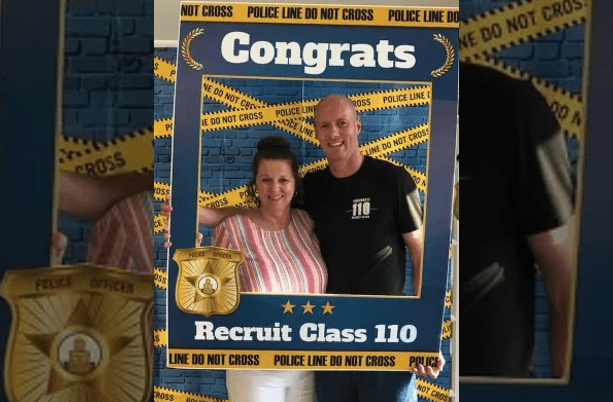 Jean Margalli and her son Matt. (Margalli family photo via The Cincinnati Enquirer)

CINCINNATI — Family members of law enforcement officers feel the stress of their loved ones holding the line between good and evil; particularly as COVID-19 and violent rioting have become daily news stories.

Jean Margalli and other women recently gathered inside the Cincinnati police union headquarters. It had been about month since protests and riots erupted following the custodial death of George Floyd. Moreover, a local police officer had recently been struck in the helmet by a stray bullet during “civil unrest” — politically correct term for riots. It was also a few weeks after a city council meeting abruptly ended after shouts about defunding the police, reported The Cincinnati Enquirer.

The women in attendance were angry. They were upset with the city council, the media, and protesters/rioters.

But more than angry, they were scared.

Scared because those officers you saw on the nightly news – the ones holding riot shields – are their families. And like many of the Black voices protesting police brutality, the police wives and moms and daughters in the room said they didn’t feel supported or heard. Where was their voice in all of this?

Margalli didn’t say much. She held a napkin with a few notes scribbled on it. This was all new to her. And as she began to speak, her voice began to crack.

Her son is 39, and he became a Cincinnati police officer in June.

Furthermore, his wife was already on the job.

“My day is consumed with anxiety and painful emotions,” Margalli told The Enquirer.

The LEO mother described a panic attack that she experienced on her son’s second day on the job. She couldn’t breathe and grew light-headed at work. These are not exactly attributes for someone working as a customer service representative for a credit union.

It felt like someone was pushing on her chest as she turned pale and had to sit down. Finally, her condition became such that paramedics were called. At the hospital, doctors thought it might have been a heart attack. She stayed overnight. Eventually, they told her what happened likely stemmed from stress, according to The Enquirer.

As a result, Margalli was prescribed anti-anxiety medication, and her son returned to work the next day.

Other women shared their stories too.

Gineen Enneking said it brought back memories of Cincinnati’s civil unrest in 2001.

Her husband was a Cincinnati police officer, working long shifts as the city’s racial turmoil made national news.

Now, her husband is close to retiring. Because he’s tired of being screamed at when responding to accidents, or being flipped off for telling someone to slow down when he didn’t even pull them over, The Enquirer reported.

The anger toward police feels worse than it ever has been, Enneking said. And she is counting down the months until her husband, Jerry, can retire – 14 at the present time.

So the women gathered to talk about proposals to defund the police; to plead with city council members for help; to vent; to support each other; to be heard.

One woman’s husband processed graphic video of Sonny Kim’s death, watching it over and over again so it could be released to the public. Another woman won’t tell her young children what their father does, because she doesn’t want them talking about it in day care.

One woman showed council members a picture of her daughter. In the photo, she was wearing a sweatshirt that said: “I’m not just daddy’s little girl, I’m a cop’s daughter.”

It was her daughter’s favorite sweatshirt. Sadly, she doesn’t wear it anymore.

Enneking, a school teacher, told the women her husband is known throughout the department as the guy who gets hit by cars. It’s happened so many times there have been news stories written about him.

People laugh. Because that’s what it’s like to be a police officer’s wife right now. Getting hit by a car and having screws put in your neck becomes a punchline.

However, beyond the comic relief are anxiety filled tears.

Enneking pointed to the wall behind her as she spoke. It was a photo memorial of officers who’d died in the line of duty.

“I remember that call,” she said.

Then, she pointed to another photo.

“I remember that call,” she said.

She pointed to several more. Enneking started crying and apologized to her daughter-in-law, who sat across the table. Her daughter-in-law is with the group of women since Enneking’s son is a police officer, too.

And she shares her worst fear; that one day her husband will not come home.

When she said that, Jean Margalli, the new police mom, reached into her purse. She fumbled for a tissue, took off her glasses and wiped her eyes, The Enquirer reported.

Margalli describes herself as timid. At times, you can hear the fear in her voice. It’s a quiver and a sigh. It’s the sound of guilt for even having these feelings at all.

Ever since her son Matt became a cop, Margalli has had trouble sleeping. Her son works the night shift: Domestic violence, drugs, drunkenness, the calls rarely stop. He doesn’t tell her everything, but he’s told her enough.

So every night, after she talks to him, she reaches for the melatonin to help fall asleep. And she prays.

“If I lost my son,” Margalli said in the union hall, “I don’t think I could go on living.”

It is not unusual for the loved one of a police officer to report more stress and anxiety than their officer. These women have bravely shared a glimpse of what it is like to be the Blue family member waiting at home.