The suspect escaped and a manhunt is underway 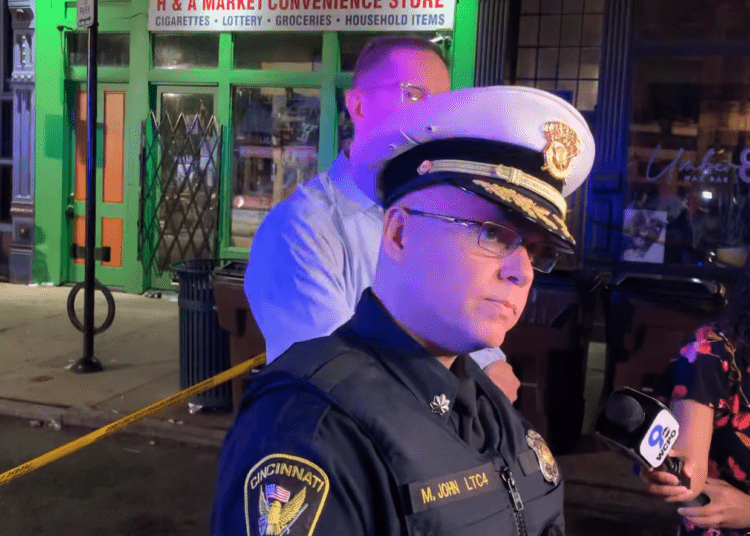 CINCINNATI – A Cincinnati police officer fired at a gunman who wounded at least nine people during a mass shooting at a crowded bar in the city’s downtown area early Sunday. The suspect fled and managed to get away, officials said, while confirming a manhunt is taking place.

According to Lt. Colonel Mike John, the victims are eight males and one female between the ages of 23 and 47. The carnage took place around 1:38 a.m. outside Mr. Pitiful’s bar at 13th and Main Streets, FOX 19 reported.

Cincinnati police said District One officers and officers assigned to the Civil Disturbance Response Team (CDRT) responded to the area to clear a large disorderly crowd from the street when a fight broke out between two groups of people.

Amid the shooting and subsequent chaos, responding officers had to deploy flash bangs to clear crowds and get to the injured, John said at the scene.

I just spoke with an employee of Mr.Pitiful’s who said they were working the door. He said all of a sudden “all hell broke loose.” They said they heard 15-20 gun shots, “It sounded like packs of fire crackers going off.” They saw multiple people taken away on stretchers. @FOX19 pic.twitter.com/Mt1qmzW8AT

So far none of the nine who were struck by gunfire appear to be in critical condition, John said.

“From my understanding … nobody is in critical condition, and most of those injuries are lower-extremities injuries,” John said.

Evidence markers follow a trail of blood all the way to Sycamore St. Police say of the 9 people hospitalized none are in critical condition. @FOX19 pic.twitter.com/1ItzXlv21F

“Seen people running and it was just melee. Chaos. I actually saw the cops running down the street trying to find the guy who they were looking for,” a witness said.

John says an officer “discharged one round” at the suspect who was “actively shooting the firearm at that time” as the gunman ran east toward Sycamore Street. It’s not known if the officer’s bullet struck the individual who is still being sought early Sunday, FOX 19 reported.

Police do not have much of a description to go on other than someone in “white shirt, dark pants. That’s it.”

Investigators are walking thru Ziegler Park and at the intersection of Sycamore and 13th right now. @FOX19 pic.twitter.com/9eiDUoOUbq

Meanwhile, officials have appealed for video footage from witnesses at the scene in order to identify the gunman and facilitate the investigation, the New York Post reported.

“Members of a civil disturbance response team (CDRT), including the officer who fired at the shooter, did a tremendous job controlling the chaotic and dangerous scene this morning,” said FOP President Dan Hils.

There was another shooting Sunday morning in the Central Business District. Police say at least two people were injured in the exchange of gunfire near the intersection of Woodward and Main Street.

Mayor Aftab Pureval says that the shootings are not related, FOX 19 reported.

“Today’s events are completely and totally unacceptable. The use of guns to solve disputes cannot be a normal part of our culture,” said Mayor Aftab Pureval.