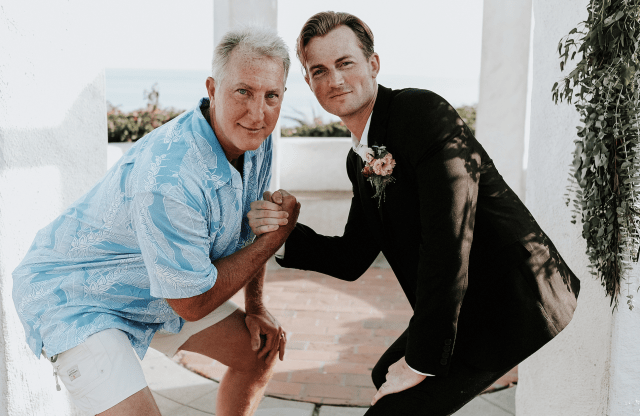 My Dad is a cop. He was nearly killed when I was 9-years-old. My story begins the night we received the phone call.

Mom left earlier in the day for an out of town work conference. Dad was assigned to day watch at the time, which meant he’d typically be home about 6:00 p.m. if all went well.

I have two older siblings, a brother who was 11-years-old, and sister who was 13 at the time. Since Mom left earlier in the day, and Dad wouldn’t arrive home until after “1800” as they call it, we had a teenage friend hanging out with us.

There is something cool about having a father who is a cop. The badges, uniform, police car, guns; it’s all pretty sweet. I loved visiting him at work. He let us play with his handcuffs and SWAT gear. On occasion he’d put us in the back of his police car, or a jail cell when taking friends on a tour of the police department. It was a little creepy, but I never worried when my dad was around.

I’m unsure what my dad said to our babysitter, but we had to turn off the TV and wait. He told her that he would be home really late … way after we should be in bed, and that Mom was on her way home.

He wanted us to know he was all right, but wouldn’t be able to see us until the next day.

The sequence of events wasn’t at all unusual … at least the part about coming home late. But I knew if my mom was driving home from her event about three hours away, something was up.

When we awoke the next morning, Dad was there. His sleepless eyes, and fatigued body told me he had probably been up all night, something we saw on occasion. But when he saw us rumble downstairs, he managed a week smile and hugged each one of us.

Did You Catch the Bad Guys?

My mom was now home, so we asked if he “caught all the bad guys.”

“You bet I did,” were his words as he gave each of us a high-five. “One of them tried to hurt me real bad yesterday, but God chose me for victory, and I won.”

Hmmm, curious words … although we are a family of faith in God and attend church regularly, his explanation caught me off guard.

Of course God chose you to win, I thought. You always win. You’re invincible!

When we pressed for more of the story, he simply said, “God chose me to win and the bad guy died. That is all you need to know for now.”

Okay … sweet … just as I thought, my dad is a superhero.

Conversations Not Meant for 9-Year-Old Ears

Yet over the course of the next few days, I overheard conversations that were not meant for me. Everyone wanted to talk to my “pops.” And whether he was on the phone, or in another room, the words from his loud voice floated through the air so I began to piece things together.

“Nearly split me in half” …

“It’s a miracle the axe didn’t dislodge my weapon” …

“Easily could have been my last day” …

“The round that saved my life” …

“Severed the brain stem and he dropped like an accordion” …

And then words that would paralyze me for several months:

“My kids nearly lost their dad. This would probably have been the day of my funeral.”

Yikes! I’m not sure what’s going on, but I don’t like any of this. Since I wasn’t supposed to hear these conversations, my 9-year-old mind didn’t know what to do with the information.

So I stuffed it … I buried it deep … so far down that I couldn’t tell people where it was or how to get there.

All I knew was my mom and dad were never going to leave my sight. … NEVER AGAIN.

Without explanation, whenever they tried to drop me off at school or church, I went into a panic attack. My body trembled and tears began to flow. I grabbed their arms and legs and was not about to let go. This was separation anxiety in its’ truest form.

In patient frustration, they tried to figure out what was going on. After all, from their perspective, I was unaware of the violent details that nearly claimed my dad’s life, so that wasn’t the problem. Right?

They asked every conceivable question trying to figure out what was wrong. Was it Mom returning to work? … a bully? … the shooting? … No, no, no I told them. Yet I really didn’t have the answers.

My Dad went into full-on-detective-mode. He thought someone must’ve molested me, so we went through the list of potential suspects and conversations about keeping secrets. “No, that isn’t it” I exclaimed in exasperation.

But like most children who are unable to voice their anxiety, I finally put it in the form of art.

I had a fourth-grade art project that asked how I would help Native Americans had I been one of the original Pilgrims. Easy! I’d help them plant corn, water their crops, hunt for food, erect teepees, … SHOOT THEM IN THE HEAD!

Yep, that is what I included several pages into my report. After all, my dad helps people and he had to shoot someone in the head. So while I cannot psychologically explain my thought process that is how it played out.

When my parents visited open house at school a few weeks later, my dad was scrolling through the report when he came upon this page.

He showed it to my mom, and the riddle was finally solved. It wasn’t the shooting that left me catatonic, but the thought of losing my dad.

My Dad Was Nearly Killed

They had a chat with my teacher who already knew something mysterious was going on. But she was unaware of the fatal shooting that saved my dad’s life. Yet now the cause of my turmoil had been discovered and we were able to treat it.

My parents have a friend who is a therapist. She came to our house and worked with me over the course of several weeks. Moreover, my parents prayed that God would simply erase my memory.

Root Cause of Anxiety

Once we worked through the root cause of my anxiety, I quickly returned to the normal kid I had been prior to overhearing the devastating news.

About a year later, my dad began preparing for a promotional exam. As a result, he studied during times we normally spent together, and I felt left out. Although I always referred to him as “Dad,” and never by his first name, suddenly I felt compelled to action.

I wrote about 15 yellow post-it notes referring to him by his first name. In each note I asked him not to promote. If the promotion took my dad away, I wasn’t interested.

A child psychologist later told us by using his first name was my way of trying to enter his adult world. After all, that is how other adults referred to him, so that is how my childhood brain tried to get his attention.

The perspective I have shared is that of a 9-year-old. I continued in childhood as a good student in school and played baseball, football, and soccer. In high school I academically excelled while playing volleyball and wrestling.

Moreover, I went to college and graduated with a degree in English. I now live in the world of a 26-year-old man who teaches and ministers to children. Furthermore, I was married to a beautiful woman, Erice, a few years ago.

Finally, while I have expressed the perspective of a young boy, honestly it is not my own. While this is a true story, I don’t remember anything more than scant details regarding the post-it notes. I have chronicled the events as they’ve been pieced together for me as an adult. Even though my dad kept one of the notes in his locker for the duration of his career, my memory is vague. And yes, my mom still has my fourth-grade Native American project. But my parent’s prayers were answered. I don’t remember any of the details that brought anxiety or caused me to tremble before marching into the world of a 9-year-old.

Jordan McNeff is the son of a retired police lieutenant, author, and Law Officer managing editor, Jim McNeff. Jordan graduated from Vanguard University with a bachelor’s degree in English. He currently works in ministry at Mariners Church in Southern California.