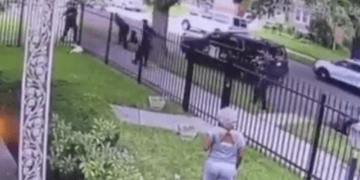 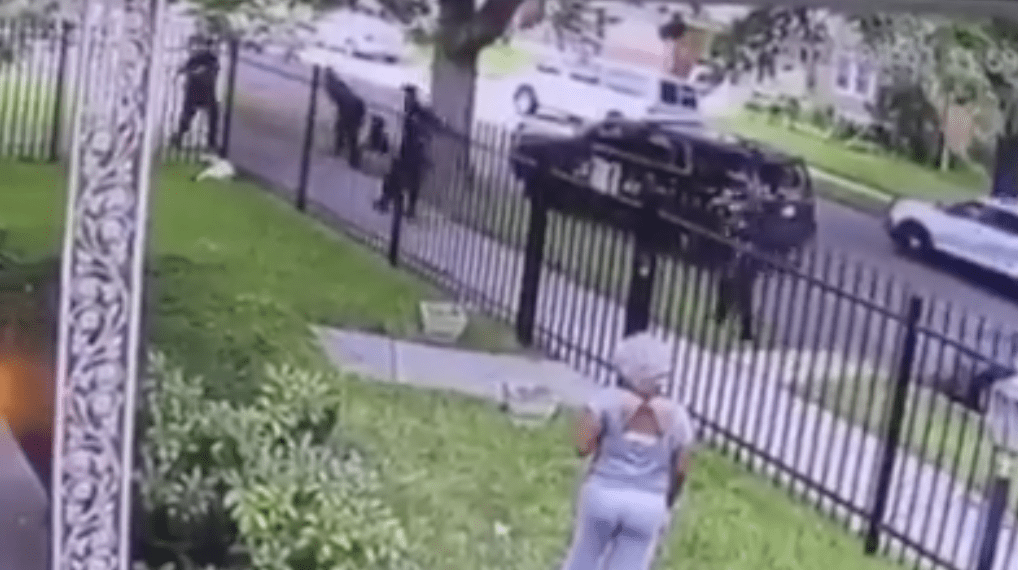 A Detroit police K9 is attacked by a dog after officers asked the owner to maintain control of it. (Twitter)

DETROIT — A Detroit police officer will not be reprimanded after shooting a dog in the head on the city’s east side Aug. 3 while searching neighborhood yards for a suspect’s weapon. A department commander said the officer acted according to protocol.

Ring doorbell footage of the encounter shows a Detroit officer walking along a residential sidewalk with a police service dog (PSD) on lead when a white medium-sized dog runs up to its home’s front gate. The two dogs run together on opposite sides of the fence. Next, the PSD approaches the gate and the white dog latches itself onto the K9’s snout, Detroit Free Press reported.

The K9 handler is then seen reaching for her weapon and firing a single fatal shot at the white dog’s head.

“Her partner was being attacked and we demand that our officers protect not only themselves but their partners and citizens. At this point it was a clear and present danger; her dog was being viciously harmed,” said Detroit Police Commander Darin Szilagyi in an interview Friday. “It’s unfortunate it came to this, we don’t like to see any animal hurt.”

The home’s front gate, a 6-foot wrought iron fence, is situated on the border of the front yard and the sidewalk, which is inconsistent with city code, Szilagyi said. Having an aggressive dog with improper restraints puts the public at risk. Moreover, the narrative of this incident would be entirely different had the victim been a small child or senior citizen walking along the sidewalk, the commander said.

“I’m a dog lover, I own several dogs, I have a responsibility to protect the public from my animals, just like anyone else,” Szilagyi said. “Keep your dogs in the backyards and this won’t be an issue.”

Officers from the 9th Precinct were searching the area for a firearm that was believed to be discarded by an arrestee while he was running from police, according to Szilagyi.

When police reached the home with the white dog, officers asked the homeowner to secure the dog, which officers believe to be a pit bull, before beginning to search. Officers decided to search the next home’s yard while waiting for the dog to be secured, however, it escaped its owner’s hold and ran up to the police K9, according to DPD.

Although animal rights organizations have responded on social media with outrage to the video, calling for the handler to be reprimanded, Szilagyi affirmed the officer acted according to protocol and was left with no choice, Detroit Free Press reported.

A Detroit police officer shot someone’s dog that posed no threat inside its own fence after he lost control of his own K9.

This officer should be held accountable. He should be fired and prosecuted. pic.twitter.com/28D4TuiMmy

“No matter what, when force is used on a person or animal, it is ugly. No one likes it, I don’t like it, I’ve been doing this for 25 years and I don’t like it,” Szilagyi said. “But unfortunately it’s necessary if you have life or death situations, and this was a life or death situation, that is the option that a police officer has to use, and I commend the officer for making a decision and coming back to work and taking care of her partner.”

The PSD suffered extensive injuries including a large rip through the skin of its upper snout and puncture wounds on its upper jawlines, Szilagyi told the Free Press Saturday. It will undergo tests and evaluations to determine whether it is fit to continue service.

The officer returned to work after completing counseling, Szilagyi said.