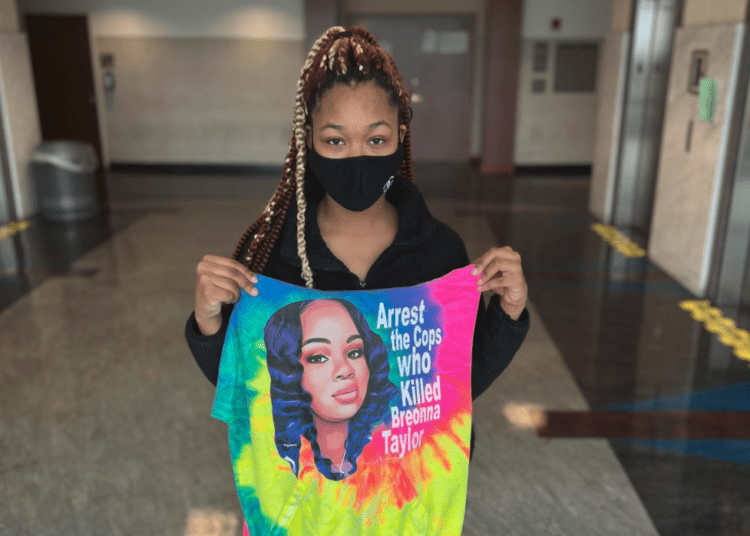 Ju’Niyah Palmer was told she could not wear this shirt in court. (Twitter)

LOUISVILLE, Ky. – The sister of Breonna Taylor was removed from court on Wednesday for wearing a shirt demanding the arrest of officers who returned fire in a tragic March 13, 2020 encounter, according to a Law&Crime.

The FBI later determined that Cosgrove fired the fatal shot that killed Taylor.

No officers were charged with Taylor’s death since their actions to return fire were justified.

However, Hankison, 45, was not only terminated from the Louisville Metro Police Department, but is now on trial for “wanton endangerment” since the rounds he fired entered a neighbor’s apartment.

Hankison said during his 2020 interview with investigator’s that he fired his weapon since he believed his life, and those of his colleagues, were in danger. He described their vulnerability as “sitting ducks,” Law Officer reported.

“I didn’t know if Jon was down and they couldn’t get his body or if he was – but all I could hear was the firing,” Hankison said. “I saw the flashing. I thought they were just being executed because I knew they were helping Jon because Jon said, ‘I’m hit, I’m down’ and the gunfire intensified.”

Taylor’s sister Ju’Niyah Palmer told the Law&Crime Network’s Brian Buckmire that she was informed the shirt — which stated “Arrest the Cops Who Killed Breonna Taylor” — was inappropriate to wear in front of jurors since it presents bias.

The judge — administering a standard judicial rule for parties in court — told her to change her shirt and not wear attire that advocates an outcome in the matter.

Here's the shirt #BreonnaTaylor sister was wearing in court this morning. The jury did not see it. The judge asked her to change her shirt. Pic taken by @BuckEsq. @LawCrimeNetwork #BrettHankison pic.twitter.com/vWUWAVDevD

Palmer voiced frustration as she seemed to lack knowledge about the charges before the court.

“I left because I just feel like they’re running around in circles about what really happened instead of actually really presenting why they’re there,” she said.

Kentucky Attorney General Daniel Cameron explained why he did not recommend murder charges when presenting the case to the grand jury.

Mattingly, who was wounded in the leg during the raid and required surgery, and Cosgrove were fired upon by Walker, and were therefore “justified in their use of fire in self-defense,” Cameron told WDRB. “Because they were fired upon, they returned fire, and I think that’s been lost a lot in this conversation. They were justified.”

“The tragedy here is that Breonna Taylor was in that hallway with Mr. Walker and was hit and died,” Cameron said. “I don’t want to at all discount or lose sight that this was a tragedy. It pains me. Again, I had to sit in a room with Ms. Palmer [Taylor’s mother] and tell her about the findings and the indictment that was rendered from this grand jury proceeding, and I know they have a lot of grief still.”

“At the end of the day, our responsibility at the AG’s office is to the truths and to the facts,” he added. “I cannot fashion the facts in such a way to meet a narrative that in many ways has already been put out there before the facts have been put out there.”

Although attempted murder charges were initially filed against Walker, they were eventually dismissed. He claimed he did not know police were at the door, even though officers were attired in police gear, and it’s been clearly established they provided knock and notice, contrary to scores of published reports.

A police sergeant testified that the original no-knock warrant to search Breonna Taylor's apartment was briefed as a knock-and-announce warrant. @LawCrimeNetwork pic.twitter.com/VeF01tmqCH

“This is always going to be a civil matter for Breonna Taylor’s family,” he said.