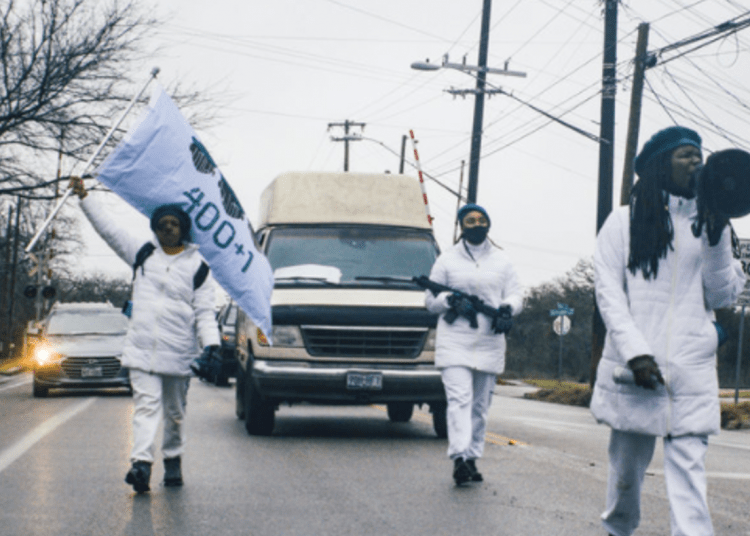 AUSTIN, Texas — A black liberation autonomous zone is forming in Austin, which is the Texas State Capitol. The developers of the city’s “sovereign citizen” collective reject state authority to “protect Black liberation and prosperity,” according to their published information.

“On Sunday, February 14th, 400+1’s L1 Collective led an eleven mile car procession around the perimeter of what is now 400+1 protected territory, renaming the area Orisha Land, and rejecting the state’s authority within it,” the group has written on its website.

“400 + 1 is a framework constructed to achieve and protect Black liberation and prosperity. This construct encourages diversity in skill and passion among its members while developing a unified ideology. 400 + 1 acknowledges the necessity of building upon the triumphs of our ancestors while critically analyzing the mistakes of the past. Ours is a youth-driven movement that envisions sovereignty as the vehicle to a freedom that has yet to be experienced by the African Diaspora,” according to fourhundredandone.com.

Police sources told Law Officer that Austin Police Department has recently become aware of this development. It has reportedly caught many people by surprise.

Orisha Land is a zone in East Austin. The 11 mile perimeter is formed by Manor Rd., 51st Street, Springdale Rd., 7th Street, I-35, Martin Luther King Jr. Blvd., and Franklin St., according to the group’s map.

“Jordan’s Place, the capital of Orisha Land and formerly known as Rosewood Park, is located at 2300 Rosewood Avenue, on the side of the park closest to Pleasant Valley,” according to the website.

“Jordan’s Place” is named in memory of Jordan Walton who reportedly died in an officer-involved shooting on Feb. 10, according to the website. (Law Officer did not locate a press statement from Austin Police Department regarding the shooting. We made an inquiry and are waiting to hear back.)

The group says it is “specifically for the Black unhoused population; claiming and defending the park in a show of resistance against anti-Black violence, the gentrification of East Austin, and the state’s antagonism of those in Austin who are without housing.”

The group says, “Orisha Land is a component of 400+1’s broader #MartialtheBlock campaign, an effort to reclaim Black communities” due to their perceptions of injustice.

Moreover, “Martial the Block is a call to action that implores Black communities to reclaim the power of the people by imposing the law of the vanguard,” the website says.

“Under the law of the vanguard, revolutionary law, police are abolished, defanged, and held accountable for the war crimes committed against oppressed people,” they claim.

Furthermore, under their revolutionary law, the following rules apply:

The group repeatedly mentions some form of “destabilizing” governance.

“400+1’s movement strategy is three-pronged. We exist to build a revolutionary vanguard, destabilize systems of oppression, and build alternatives to which Black folx can flee, build capacity, and become revolutionaries themselves.”

“Along the way to our liberated future, we will solidify a revolutionary vanguard dedicated to building alternatives and destabilizing oppressive institutions.”

“Along the way to our liberated future, we will establish Black intentional living communities at which the Black masses can learn, heal, celebrate, and prepare to resist.”

The development of Orisha Land is alarming. The impact it will have on the area as well as the city/police response is yet to be determined. You can read more at their website.

Law Officer has reached out to the Austin Police Department as well as Mayor Steve Adler’s office. We will publish their response once it’s received.

The members of Orisha Land have been apparently served with a notice to vacate. In response, one of their leaders said, “In case it’s not f***ing clear, we are not f***ing going anywhere.” Read more.