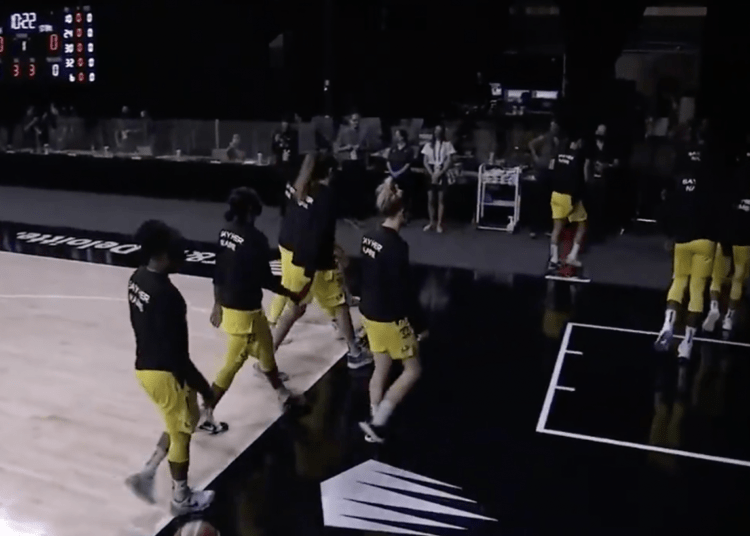 BRADENTON, Fla. — WNBA players on the New York Liberty and Seattle Storm walked off the court while the national national anthem was played prior to their game on Saturday.

The WNBA players said in remarks before the game that their demonstration was over the death of Breonna Taylor, a 26-year-old black woman killed in March.

Taylor’s death came after police executed a “no-knock warrant” at the address, in search of a drug suspect who did not live there, and no narcotics were located in her home.

Liberty player Layshia Clarendon stood at mid-court with Storm’s Breanna Stewart before the start of the game at IMG Academy in Bradenton, Florida, and dedicated the season to Taylor, according to The New York Post.

As the national anthem was played, the @nyliberty and @seattlestorm walked off the floor as part of the social justice initiative. pic.twitter.com/VihH5X3Yzh

“We are dedicating this season to Breonna Taylor, an outstanding EMT who was murdered over 130 days ago in her home,” Clarendon said. “Breonna Taylor was dedicated and committed to uplifting everyone around her. We are also dedicating this season to ‘Say Her Name’ campaign, a campaign committed to saying the names and fighting for justice of black women – black women are so often forgotten in this fight for justice, who don’t have people marching in the streets for them. We will say her name. Sandra Bland. Atatiana Jefferson. Dominique Remy Fells. Breonna Taylor. We will be a voice for the voiceless.”

Grand Master Jay, head of the “Not F***ing Around Coalition,” refers to the U.S. Constitution when talking about his Black armed militia group, which will march in Louisville on Saturday.

“Once it gets to that point where it looks like the government is non-responsive to the will of the people, the Constitution says to [form a] militia to address the grievances of the people,” he told WDRB-TV.

“I didn’t write it,” he says about one of America’s founding documents. “They wrote it. We just abide by it. So that’s our destination, because when it looks like the government is being indifferent to the people, the people have the right to form themselves – and arm themselves — to ask those questions.”

On Friday, Louisville Councilman Kevin Kramer, a Republican, urged residents to stay away from the city’s downtown area on Saturday while the militia’s march is underway.

“The potential for violence will be heightened as we will more than likely have a number of highly armed groups representing very different viewpoints as well as other groups all situated within a block of each other,” Kramer told WDRB.

“While efforts are being made to ensure a safe environment to all persons present, I would caution you that the potential for violence will exist.”

He added: “I don’t have a lot of confidence that the police department is going to have the resources that they need should something go wrong.”

In June, a Louisville police detective linked to the Taylor case was fired, Law Officer reported.