Whose streets? Our streets!' 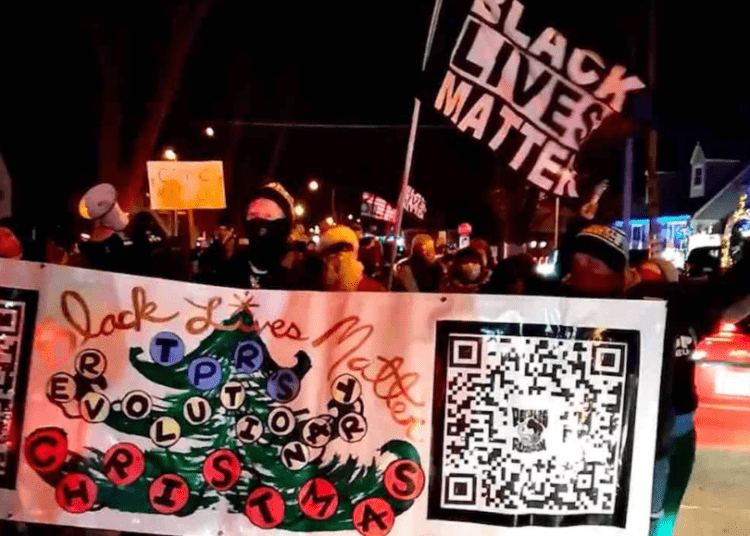 A Black Lives Matter group invaded “Candy Cane Lane” on Friday night — a residential neighborhood in West Allis, Wisconsin. The neighborhood was carrying out a 36-year tradition that decorates Christmas lights to benefit children with cancer.

According to the Milwaukee Journal Sentinel, The People’s Revolution was identified as the group and arrived while marching, chanting and shouting through bullhorns at vehicles lined up in the streets to see the displays.

You may be familiar with The People’s Revolution of Milwaukee as they have spent months attacking hero cop Joseph Mensah, who was shot at while at a residence off duty at one of the protests.

Here’s a brief history of Candy Cane Lane from its website:

In December,1984, a wonderful group of neighbors living in West Allis, Wisconsin, joined together to collect donations for the MACC Fund — Midwest Athletes Against Childhood Cancer, Inc., in honor of a neighbor’s child diagnosed with cancer. The neighbors worked in concert in decorating their homes and encouraged visitors to make a small donation as they drove through the festively enhanced neighborhood. All of the money raised went to supporting research, treatment, and the eventual discovery of a cure for childhood cancers and related blood diseases.

The group chanted “Black lives matter” and “Black children matter” while marching through the streets holding signs and at least one participant was dressed as Santa Claus.

Protesters have been marching in different parts of the Milwaukee area for more than 200 consecutive days.

Protesting a a children's cancer fundraiser. Way to go, clowns. They should have to make a donation from the millions they got in donations. https://t.co/PONy58HvMx

Since 1984, Candy Cane Lane has raised money for the Midwest Athletes Against Childhood Cancer. So far this year, organizers have raised more than $121,000.