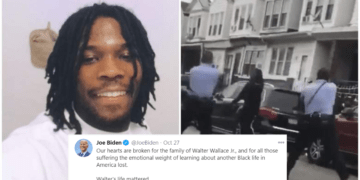 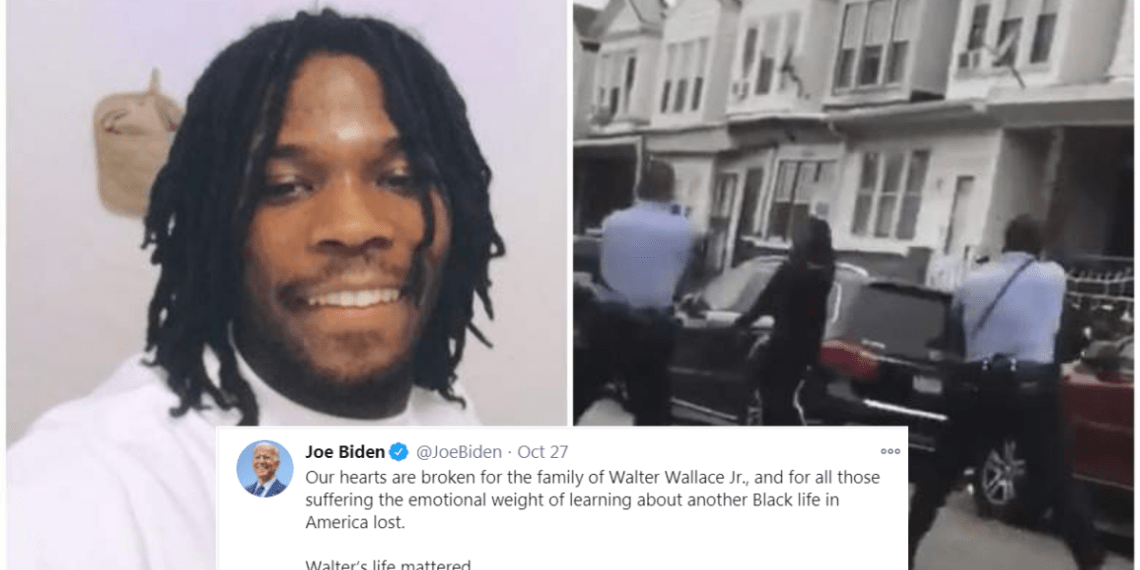 Cops were called to a location on Monday afternoon after the report of a domestic violence in progress. They were met with Walter Wallace Jr. who was a convicted felon who had served time for a robbery and previously for attacking a police officer. 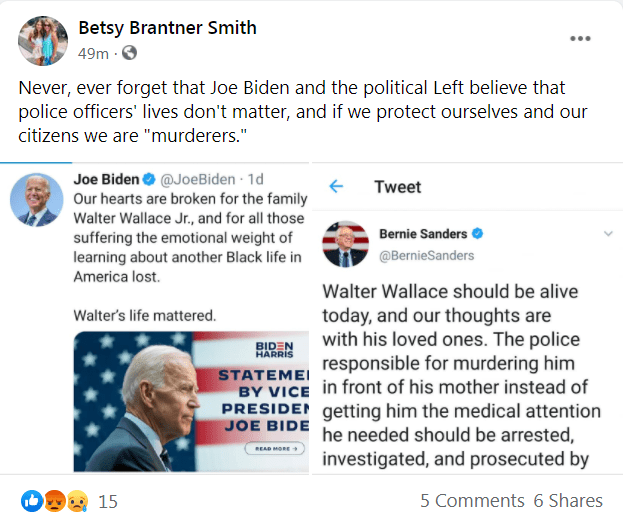 Wallace became aggressive and held a knife up towards officers. The two Philadelphia officers gave multiple commands for Wallace to drop the knife and retreated until Wallace came within 10-15 feet of them. Wallace was shot and killed.

Riots and looting have erupted in Philadelphia ever since and on Wednesday Joe Biden and Kamala Harris issued a statement.

“Our hearts are broken for the family of Walter Wallace Jr., and for all those suffering the emotional weight of learning about another Black life in America lost. We cannot accept that in this country a mental health crisis ends in death. It makes the shock and grief and violence of yesterday’s shooting that much more painful, especially for a community that has already endured so much trauma. Walter Wallace’s life, like too many others’, was a Black life that mattered — to his mother, to his family, to his community, to all of us.”

You read that right. That was not a fake tweet. It was taken from an article on Biden’s official website and then he took to twitter to say the same thing.

Our hearts are broken for the family of Walter Wallace Jr., and for all those suffering the emotional weight of learning about another Black life in America lost.

Of course, sympathizing with violent felons that attack police are nothing new. It’s been just a few months since Jacob Blake, another wanted violent felon, attacked cops with a knife before trying to steal his ex-girlfriends car and kidnap her kids. After he was shot, Kamala Harris visited his family and she said she was “proud” of them.

And who can forget Biden’s fawning over violent criminal Michael Brown over the summer.

It's been six years since Michael Brown's life was taken in Ferguson — reigniting a movement. We must continue the work of tackling systemic racism and reforming policing.

If you find all of this crazy, consider that just a week ago, 41 year old veteran Houston Officer Harold Preston was shot and killed by an illegal immigrant.

Yet, they are falling all over themselves speaking praises and offering sympathy of the “emotional weight” after a violent criminal tried to kill two police officers.

That’s odd considering that Walter Wallace did not feel that this life mattered. If he did, he would not have attacked cops with a knife or at worse, he would have simply dropped the knife when officers told him to.

But there is a hero, that happens to be black, that did have a life that mattered. He served the city of Houston for 41 years. He was planning to retire this year.

He led his life every day as if it mattered.

That is something that Walter Wallace did not do but somehow he deserves that credit from Presidential Candidate Joe Biden.

Biden and Harris closed their statement by saying that “All Donald Trump does is fan the flames of division in our society.”

So let’s get this straight. Joe Biden takes a justified shooting of a violent criminal and implies that once again blacks are being targeted by law enforcement but it’s President Trump fanning the flames?

This ignorance and hatred from Joe Biden and Kamala Harris is very telling and something that law enforcement and America should reject wholeheartedly.

Law Officer is the only major law enforcement publication and website owned and operated by law enforcement. This unique facet makes Law Officer much more than just a publishing company but is a true advocate for the profession.
Tags: black lives matterjoe bidenKamala Harrislootingphiladelphiaprotestriotswalter wallace