'The guy was just so full of love' 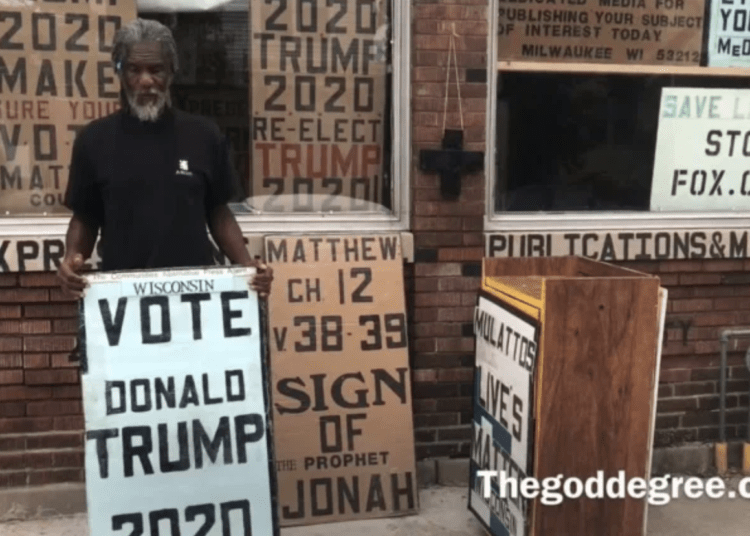 MILWAUKEE — A well-respected fixture of Milwaukee’s Black community has been identified as a homicide victim. He was a supporter of President Trump as well as the Black Lives Matter movement.

Bernell Trammell, 60, was shot and killed Thursday afternoon in front of a storefront with signs in the window supporting Trump’s reelection, according to reports. He ran a small business at the location.

A makeshift memorial grew in size at the spot where he was killed, reported Fox 6 Milwaukee.

“The guy was just full of love,” Dick Nelson said, according to the station.

One of Bernell Tremmell’s signs. It was reportedly turned backwards after the homicide occurred. (Photo via Fox 6)

His last known conversation was with a blogger on the morning of the shooting.

“He’s just a community figure,” Agoro told the station. “I respected him just because he had a position…He’s got his opinion on why he feels that way; and I’m not going to knock him.”

It was around 12:30 p.m. when police said they got a call for a shooting. Roommates Andrew Olmstead and Taylen Pulley were heading out to shoot some hoops at the time.

“We walked outside on the porch and we see all these cars, so we’re like, ‘let’s go over and see what’s going on,’” Olmstead said.

“We saw the cops pull up: the vans, ambulance, firefighters, and we sat and watched. They gave CPR for about 15-20 minutes,” Pulley said.

Janette Island said she would pop in the storefront of his three-story building where he had a publishing company, talking religion from Christianity to Rastafari.

“It was very deep conversations, very philosophical,” Island said. “He was a really great guy. He meant no harm.”

The Milwaukee Journal Sentinel quoted Reggie Moore, director of Milwaukee’s Office of Violence Prevention, as saying that he recently intervened in a dispute between Trammell and a young man.

Moore thought the incident was related to a Trump sign that Trammell was carrying, the paper reported.

“He’s a Black elder who didn’t deserve to die the way that he did,” Moore said.

Milwaukee police don’t have a lot of information—or a motive, Fox 6 reported.

Andrew Hitt, chairman of the Republican Party of Wisconsin, called for federal prosecutors to investigate the “senseless” killing of Trammell, reported the Milwaukee Journal Sentinel.

“Because of Trammell’s well known political activism and the possibility that his murder could be politically motivated, I respectfully request that United States Attorney Matthew Krueger open an investigation into this heinous crime,” Hitt said in a statement issued late Friday. “No American should fear for their personal safety because of where they live or their political affiliation.”

Community members have created a memorial with candles, plants and chalk art outside the eXpressions Journal office. A memorial service is set for 5:30 p.m. July 31 outside the business.

UPDATE: Milwaukee police have released photos of a suspect in the shooting death last week of Bernell Trammell.

The suspect is described as a male in his 30’s, 6’00, 200 pounds, last seen wearing a white and red baseball cap, a black mask covering the lower portion of his face, a black and red long sleeve shirt with white writing on the front, white or light-colored pants, black socks and pic.twitter.com/jO23ASrGVa

The photos were taken from surveillance cameras near Trammell’s storefront, FOX reported.

Police said the man being sought was a 200 pound 6-footer in his 30s. The photos show him wearing a white and red baseball cap, a black mask covering the lower portion of his face, a black and red long sleeve shirt with white writing on the front, white or light-colored pants, black socks and white shoes.

Two of the photos show the man riding a bicycle, which police said was his “mode of transportation.”