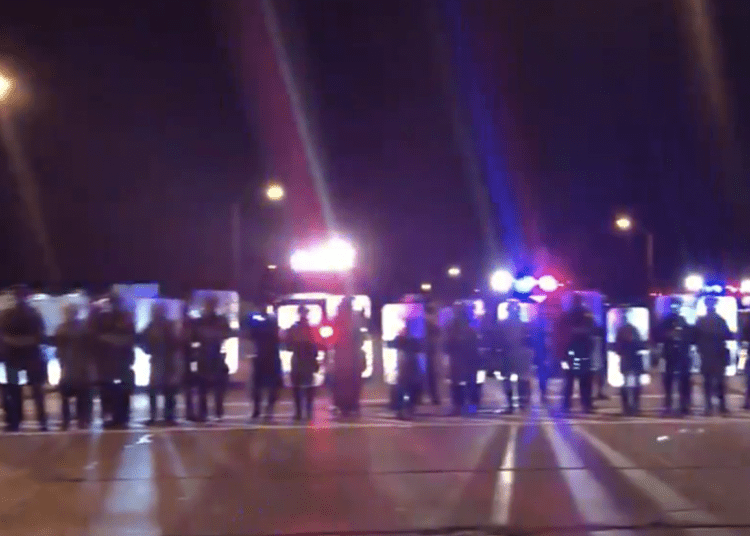 WAUWATOSA, Wis. — Protesters and agitators in Wisconsin faced tear gas and pepper balls Friday night as unrest continued following protests after a Black police officer was cleared in the fatal shooting of an armed combatant from earlier in the year.

The protests ignited this week after prosecutors announced Wauwatosa police Officer Joseph Mensah was legally justified in shooting Alvin Cole, 17, outside the Mayfair Mall on Feb. 2.

Prosecutors said Mensah had a reasonable belief that deadly force was necessary when responding to a reported disturbance at the shopping center, Law Officer reported.

Cole was the third person who placed Mensah in a position to appropriately use deadly force in recent years. Yet regardless of facts in a given shooting, emotion and politics have overwhelmed protesters and agitators as they’ve taken to the streets of Wauwatosa and elsewhere in the Milwaukee area.

Mensah is a 14-year veteran of the department. He has been under intense attacks over the past several months, including a shooting that occurred by BLM protesters at a home where he was located, Law Officer reported.

Just before 10 p.m. Friday, the confrontation with police escalated.

Videos circulating on Twitter show police charging, in a line, toward protesters chanting the same tired chant, “No justice, no peace!”

Footage then showed the crowd retreating as gas was deployed with some screaming that it felt like a “war,” FOX reported.

“Heavy dose of tear gas and pepper balls deployed. This is the worst I ever got it,” Ricardo Torres, a reporter from the Milwaukee Journal Sentinel tweeted.

I tried taking another video before being overwhelmed by the chemicals in the gas. It took me a solid 10 minutes of gasping for air like I never gasped before before I started getting solid amounts of oxygen pic.twitter.com/b5qocCSeOP

The gas was so overwhelming, Torres tweeted, that it took him a “solid 10 minutes of gasping for air” before he was able to get “solid amounts of oxygen.”

On Wednesday, Milwaukee County District Attorney John Chisholm, in a 14-page letter said evidence showed Cole fled from police carrying a stolen 9mm handgun. He cited squad car audio evidence, along with testimony from Mensah and two other officers, that he said showed Cole had fired a shot while fleeing and refused commands to drop the gun.

The Wauwatosa Police and Fire Commission engaged in politics and suspended Mensah with pay in July, which he has appealed. The commission hired former U.S. Attorney Steven Biskupic to investigate and in a report released earlier Wednesday, Biskupic recommended that Mensah be fired, saying the risk he might shoot a fourth person is too great.

In essence, Biscupic has recommended that a Black police officer whose actions have been legally justified be terminated for doing his job.

The city of Wauwatosa issued a nightly 7 p.m. curfew after Chisholm’s decision was announced, to run until next Monday. Many people have ignored the curfew, marching peacefully in the city.

But late Wednesday evening, well past the curfew, a group of a few hundred protesters confronted a police line. Police said some in the group were throwing rocks at law enforcement and buildings and that they used tear gas to disperse the protesters.

Editor’s note: The titles of our articles tell a brief tale of the horror that Ofcr. Joseph Mensah is experiencing. You can review the stories here: