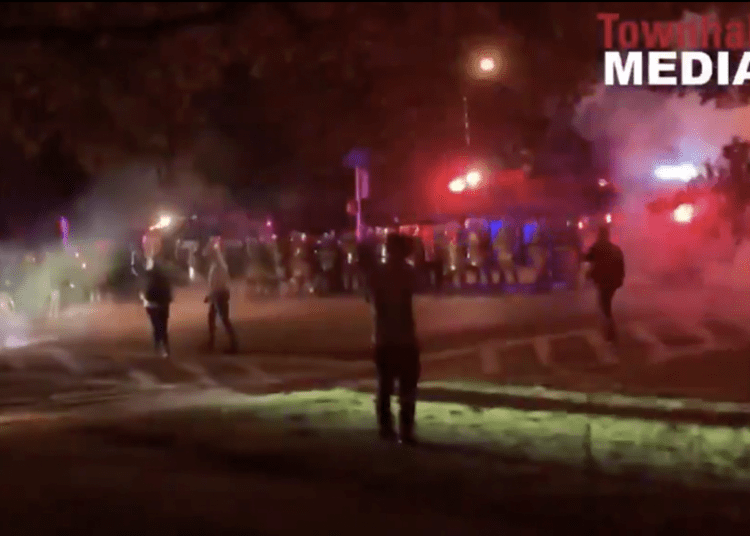 Violence breaks out after a black Wauwatosa officer is cleared in a fatal shooting. (Twitter)

WAUWATOSA, Wis. — Black Lives Matter mobs protesting in Wisconsin over the decision not to charge a black police officer for fatally shooting a gun-firing teen turned their rage on innocent homeowners — lobbing rocks through windows on a residential street.

Officer Joseph Mensah has been cleared by the D.A. for defending himself against a suspect armed with a stolen gun and firing it as he fled. Read the D.A.’s letter to the Wauwatosa Police Chief here.

Troubling video showed up to a dozen people running up to homes in Wauwatosa, the sound of breaking glass and celebratory horn blasts as they repeatedly hurl heavy objects through windows, New York Post reported.

“That’s people’s houses!” at least one distressed-sounding woman screamed, as others tried to get the rampaging mob to stop, as filmed by Julio Rosas, a reporter for the conservative publication Townhall.

Some rioters in Wauwatosa, WI are now smashing windows of homes. People in the crowd tried to stop them from targeting homes. pic.twitter.com/vIiDQDPzTr

“That’s their f—ing home — it’s not their fault!” shouted another man in the crowd.

Wauwatosa police tweeted warnings to locals to “shelter in their homes, lock their doors, and move away from windows.”

At least one horrified homeowner confronted the mobs as a motorcyclist drove through his yard.

“Do you have any idea how many Democrats, how many MPS teachers, union members, other people that support you live on this street?” the man complained to protesters in another clip filmed by Townhall’s Rosas.

“Police your protest!” he called out to those arguing with him. “Show some respect!”

Other footage shot by Rosas showed mobs whooping in celebration as they smashed businesses’ windows, with one man walking along and using a hammer to calmly ensure every window broke.

A group was also seen calmly looting a gas station, only leaving when someone warned, “Hey, the police coming” — with Rosas filming some running away with their hands up to celebrate their stolen loot.

People began looting a gas station in Wauwatosa and only stopped because police started to roll in. pic.twitter.com/4u5YCZQcmB

Police eventually used tear gas on the rioters, saying they “continued to disobey lawful orders to disperse,” the Post reported.

Wauwatosa had already called a curfew — with “hundreds” of National Guard troops at the ready — in anticipation of a violent reaction over the decision clearing Officer Mensah.

The lethal force used by Mensah was justified. The D.A. ruled he “had an actual subjective belief that deadly force was necessary and that belief was objectively reasonable.”

He cited squad car audio evidence, along with testimony from Mensah and two fellow officers, that he said showed Cole had fired a shot while fleeing and refused commands to drop the gun.