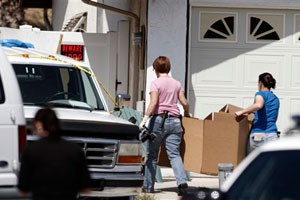 SAN DIEGO, Calif. — Authorities are investigating after a couple and their two daughters were found dead Tuesday in a swimming pool and bathtub at their San Diego home in a quiet cul-de-sac.

The bodies of a man and two females were found in the backyard pool at the Bay Terraces home, Police Lt. Ernie Herbert said. The fourth person, a woman, was found dead in a bathtub inside.

Police were withholding the victims' names pending notification of family but confirmed that the four were related and lived at the house.

Jose Villa identified the home's residents as his stepdaughter Georgina Pimienta; her husband, Alfredo Pimienta; and their daughters, Priscilla and Emily. He said the family owns a towing business.

Priscilla Pimienta was to graduate from high school next month, while her sister was 7 years old, said Priscilla's classmate Alex Jasmund.

Police said a relative found the bodies around 6:30 a.m. after going to the home to meet with the male victim regarding a business transaction. The male victim had called the relative and asked him to come over, police said.

In an afternoon news release, Herbert said no cause of death had been determined but autopsies were planned and an investigation was under way. San Diego Fire-Rescue spokesman Maurice Luque said earlier it appeared all four had drowned.

Meanwhile, friends and neighbors said they didn't notice anything unusual leading up to the deaths.

Villa said he picked up Emily from school on Monday and nothing appeared amiss.

Jasmund, 17, said he went to a pool party at the home Saturday night with about 10 of their mutual friends. All four family members were there and everything seemed normal, he said.

Marlon Soriano, who lives two doors away, said the family had been renting the home for a year or two. They hosted pool parties for relatives in the summer.

"They were a really close family," he said.

The ranch-style house is one of the few rental properties in the safe, family-oriented neighborhood, said the 22-year-old Soriano, who has lived in the area since he was born. New tenants arrived at the home every two or three years.

"We're all pretty close-knit," Soriano said. "We all know each other."

Soriano waved hello to the family but generally didn't talk to them. The younger girl often played with other children in the neighborhood.

"The children were happy," he said. "They always seemed to be smiling."