They Said He Was Too Much To Handle… 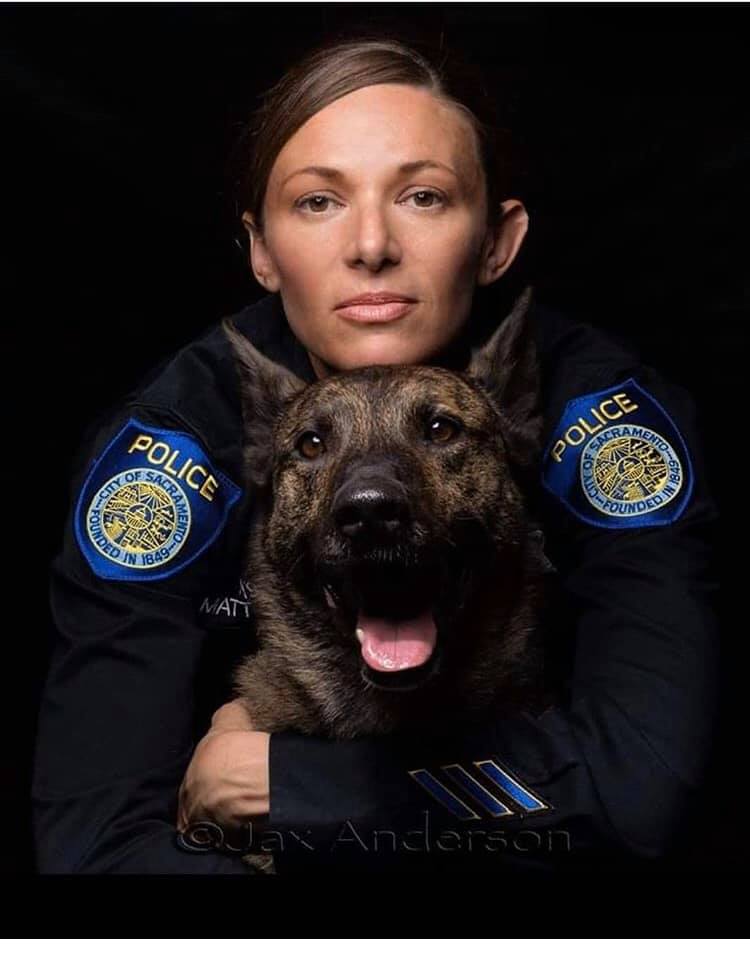 They said he was too much to handle. That’s all I knew about him. He had lived on an Indian Reservation, was returned to a shelter, and was too much to handle. That is where our story started. I was looking for my second police dog and after numerous trips to L.A. to test imported dogs, all of which failed Sac PD’s stringent tests, we heard of a 9-month-old Dutch Shepherd. A local dog at a kennel in Sonora. He was a rescue. Pulled from a shelter in Humboldt County by North American Dutch Shepherd Rescue, but set aside for police work when someone saw his potential.

We took the drive to Sonora and I met ‘Pyro’ for the first time. From what I remember, he was standing on top of a cargo container, at least 10’ high, when we pulled in. Keenly watching. I wondered how he could of got on top of something that tall. He was slender, just 51 lbs., still a puppy, yet had huge ears that he hadn’t quite grown into. We took him on loan and headed back to Sacramento.

This little brindle rescue never backed down. There wasn’t anything we could present to him that he would shy away from. He passed each of our tests. He was tough, determined, strong, yet incredibly social. I could tell he was going to be challenging, but we chose him. ‘Pyro’ was renamed ‘Rollo’, his namesake a crabbing boat in Alaska, and we began our journey.

We became a team of firsts for Sac PD – he was the first Dutch Shepherd the K9 Unit had ever chosen, the first rescue, and the youngest dog ever selected. We finished our training and hit the streets, he at just a year old! And he was paired with me, the first female handler for our department.

I quickly learned a few things about Rollo. If you didn’t give him something to do, he would find something to do. My little ‘Dingo’ tested my patience on training days, humbled me on the trial field, yet brought out my proudest moments while working. We were a great team, the best partner I ever had. I would choose him again, over anyone.

At home, the dog that was too much to handle became my son’s first friend. Meeting when he was just 4 months old, and Rollo still a puppy himself, the two of them would grow up together. Rollo would lay next to my son while he was a baby, learning to crawl, stand, sometimes using Rollo for support. Letting him sit on his back like a horse as my son giggled until he fell off. When he was older, they moved to the backyard and became buddies, playing for hours with the hose. Hauling tennis balls in his tractor, “Raw-ro” patiently following behind. Playing baseball, Rollo the best outfielder. Emptying stockings at Christmas. Rollo had one too. He was part of our family.

He loved to go work. And I loved being his partner. Every day, he watched the sun rise through the back window on our morning drive in. It calmed him. I would always reach back and pet his shoulders. Throughout the day he would come through the center and put his paw on my shoulder while I was driving or lean in for a kiss on his nose. He was so affectionate, yet would shift to work mode if he heard the dispatcher raise us, “K9-1”?… He would start barking. It was time to work, Mom.

We were there for the officers. We were their back-up. To search for suspects that had got away or to just handle a call because it was safer to use a police dog. Rollo never recognized danger. He never knew that I was asking him to go first so that our officers could go home safe to their families. I don’t think he would have backed down. He was inherently brave. He had it in him the day I picked him up. He would do anything for me. He earned the badge he wore, and then some.

He was captivating to watch during a search. He could work for hours, never tiring, never giving up. If it was summer and he came across someone’s pool, he would take a quick dip. I wouldn’t mind and my cover officers would usually laugh. If a homeowner happened to see, they would laugh too.

Rollo loved catching bad guys, stealing my Starbucks mochas when I got out of the car, treats from Peggy at the garage, and interrupting his shop friends to lean in for some pets – they never minded. He loved swimming, working on his relax, the pool waterfall, the hose. He loved Dr. Wong, his favorite nurse Leslie. He loved his K9 friends – Ace, Kona, Bosko & Iron. He loved making his rounds at SWAT briefings and roll-calls, our weekend naps, crawling up on his Aunt Chelle’s lap for scratches. He loved me.

And he adored kids. Demos for one class, the whole school. No problem, that meant more pets. He loved when I would idle through a neighborhood with all the windows down in-between calls. He knew exactly what we were doing. He knew if I saw kids, I would stop. Get out. Talk to them. Introduce Rollo who was already leaning halfway out, tongue out happy, waiting for a pet. During his 9 years of service, I used the dog that was too much to handle to make countless connections with the youth in our community and build trust between my uniform, our badges, and them.

Rollo was a warrior to the end. His spirit and bravery that he had as a pup never died. He never gave up on me on the streets and he never gave up at the end in his battle with cancer. I gave up for him.

On November 22, 2019 we stopped for our last peppermint mocha before heading one last time to VCA Animal Hospital. Rollo was surrounded with love – a few K9’s, our old partner Randy circling in the police helicopter above us, family, VCA staff that had cared for him. And loved him.

They said he was too much to handle.

I guess we were perfect…

You were never too much for me, Rollo. Find ‘em buddy. Get ‘em outta there… I’ll catch up to you ❤️

Editors Note: December 9, 2016, was K9 Rollo’s last patrol shift and Officer Matthew’s last day as a K9 officer. Below is her story.

Law Officer is the only major law enforcement publication and website owned and operated by law enforcement. This unique facet makes Law Officer much more than just a publishing company but is a true advocate for the profession.
Share—and speak up for law & order...
Tags: dogfallenK9Officer Downsacramento police