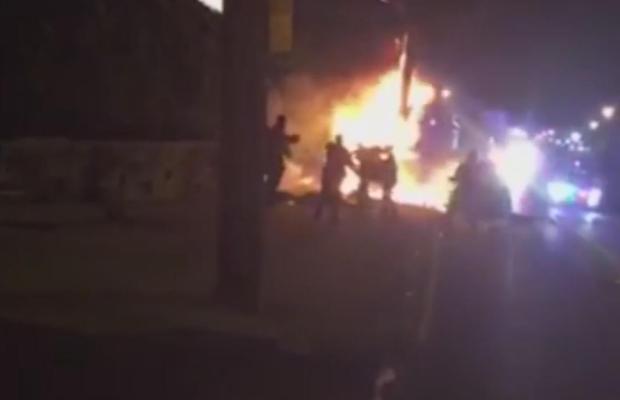 This Job Is Impossible

This Job Is Impossible

“This Job Is Impossible.”

That’s the famous line Law Officer Columnist Chelsea Whitaker says and that has never been more true than today.

Jersey City (NJ) Police officers chase a suspect for six miles with shots fired throughout the pursuit.  The suspect vehicle wrecks into flames and as police arrive, they see a man on fire.

Of course the media is outraged that this guy on fire was an innocent bystander but the outrage isn’t at Leo Pinkston, who ran from cops and crashed into the 28 year old bystander, it’s at the cops.

As police approach the man on fire, there is no doubt in my mind that they had no idea if this was a suspect or an innocent victim.  After all, how could they. The suspect vehicle erupts into flames and out of the flames comes this guy on fire.  But remember, “This Job Is Impossible.”

Police approach with guns drawn but immediately holster and approach the man on fire.

This is what the witnesses and those filming don’t do.  They actually don’t do what the cops did….help this man.

It does appear that when the first officer approached, he kicked at the suspect in his upper body but then he moved his foot around his back and eventually “dragged” his foot across the man.

The media wants the public to think that a bunch of cops started kicking randomly at a poor guy on fire but anyone that pays attention to the video will see something quite different.  Most importantly, the act of dragging your foot on someone is exactly what you would do to put out flames, smoke or embers.

The man is then dragged away from the flames.

The investigation has just been launched and we will get answers to what we don’t know but I’m certainly concerned with the rush to judgment by the media and Mayor Fulop who called for the officers to be identified, adding on Twitter, “We’ll pursue termination + criminal charges as appropriate.”

That is scary that a man in political power could be so reckless but after all, law enforcement is all too familiar with the rhetoric.

While we don’t know a lot at this point, this one hits close to home with me.  In 1995, long before cell phone video and a media that foams at the mouth at the thought of excessive force, I pulled up to a man pouring gasoline on a car.  That seemed odd and it was especially odd that a man was inside the car.  Myself and two other officers approached the guy as he finished pouring the gallon of gasoline on top of the car and lit a match.

It was a deadly force situation but before we could get our guns out, he dropped the match and the car went up like a Christmas tree at the Griswold’s House.  One officer tackled the pyromaniac suspect while myself and another officer fought our way into the car and rescued the victim.  We dragged him fast and hard away from the car as it crackled and eventually exploded.  Well, it probably didn’t explode but it felt like it.

To the witnesses, we had brutalized this guy.  We roughly pulled him on the ground away from the car while the suspect was tackled and handcuffed. There was no video but it was enough to garner me a complaint of excessive force.

To this day, I still may be the only cop to get an excessive force complaint and Medal Of Valor in the same incident.

I was like Cal Ripken in 1983, that would never see another World Series.  I thought Medal of Valor’s were easy.  They aren’t and I would never get close to one again but complaints and now irresponsible politicians have remained steady in this profession.

Honestly, I don’t know everything that happened this past Sunday in Jersey City but I know what Chelsea knows.  This job can be impossible.

I Love This Country