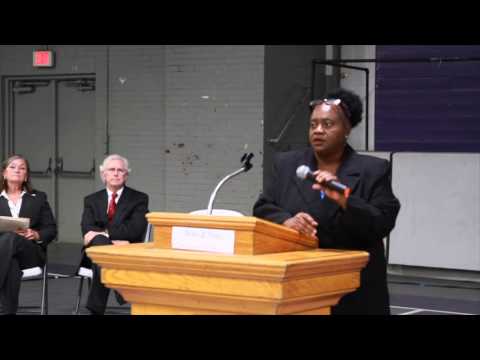 Darlington (SC) City Councilwoman Sheila Baccus is accused of using racially charged language when speaking to an on-duty police officer during an incident in June.

According to a police report obtained by News13, an officer was enforcing parking enforcement on June 17th when the officer observed a vehicle parked on the wrong side of the street.

After placing a parking ticket on the windshield of the vehicle, Councilwoman Baccus reportedly asked the officer what was going on. The officer explained that he had issued a ticket and that he had previously given a verbal warning for this same violation. The officer says another woman then appeared. The officer recognized the second woman as the person previously warned about the parking issue.

At this time, according to the police report, Baccus said to the officer, “Why are you harassing us? You don’t have anything better to do than write parking tickets?“

The officer told Baccus that this was his job and to contact Darlington Police Chief Kelvin Washington if she had a problem with it.

Baccus then reportedly made a phone call, ended the call, and then said, “The chief said he will take care of this ticket“.

Then, the report claims Baccus said this to the officer:

“Take your white self back to the white neighborhood. … You’re probably the kind that would shoot us in the back.”

The officer did not respond to the comment and left.

On Friday night, Chief Washington provided this statement to News13:

“On June 17, 2020, an unattended white SUV was improperly parked on Oak Street. An officer approached the vehicle and placed a parking ticket on the vehicle for being improperly parked. It was later discovered that the vehicle was being operated by Councilwoman Sheila Baccus. The officer handled this interaction with Councilwoman Baccus with the highest level of professionalism and he has my complete support. He did nothing wrong and said nothing wrong. He was simply just doing his job. Any questions about Councilwoman Baccus’ actions or comments that day would be best answered by her. The parking ticket was paid two days after the incident.”

According to ABC15, Officer Paul Bryant filed an incident report for verbal harassment against Baccus following the incident.

On Friday night, Darlington Mayor Curtis Boyd also referred all questions about the incident to Baccus.

ABC15 requested the incident report. It reads as follows:

“As I turned to go back to my patrol car I observed subject #1, a black female coming from the backyard of the residence walking toward the white SUV. As she got closer to the SUV she stated to this officer, ‘What’s going on?’ At this time I, Officer Brian informed her that I, had issued a parking violation ticket, for parking on the wrong side of the roadway.

“I, then informed her that I, had previously gave a verbal warning for the same violation. At this time another subject, # 2, black female came to the door of the residence and made a comment in reference to what was going on as well. This officer recognized this female at the door as the same female I had, given the verbal warning to in reference to improper parking. She then commented about the parking.

“Then subject number #1 then said to the officer ‘Why are you harassing us, you don’t have anything better to do than write parking tickets?’ This officer replied: ‘This is the job that the chief has me performing and if you have a problem you need to call him.’

“Then she said, ‘I will, what your name?’ At that time, she made a call on her cell phone. Why do you have this white officer over here harassing us? Then it looked like she ended the call and said to this officer, ‘The chief said he will take care of this ticket.’

“Then I stated that’s good, I, wasn’t harassing anyone.

“She said ‘take your white self back to the white neighborhood.’ She paused then stated: ‘You’re probably the kind that would shoot us in the back.’ This officer made no comment and returned to MT patrol car and left the scene.”