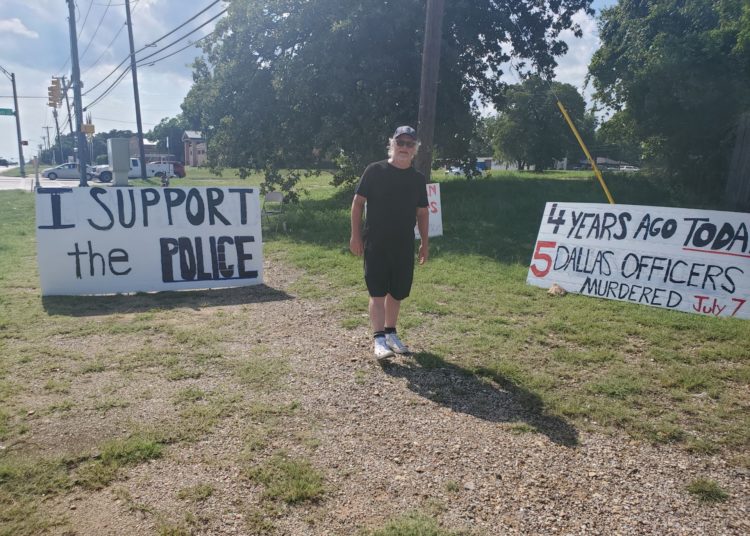 Retired Police Officer Jimmy Meeks was concerned that the pro-police crowd was just kind of “sitting back and watching the other side take over.” In his mind, they weren’t speaking out as much as they should have.

So he staged his own ”protest.”

Meeks, who served for five years as an officer in Oklahoma, and then 30 in Texas, put together his own signs and headed to a busy intersection.

“I knew that Tuesday, July 7, was the 4th anniversary of the night the officers were killed in Dallas. And I just felt the public needed to be reminded of that,” Meeks said.

Meeks probably remembers that night more so than many because he was there.

“I went to the protest in downtown Dallas that night. I didn’t go to participate, but to spectate. I wanted to see what was going on. The press later claimed that it was a ‘peaceful protest turned violent,’ but that wasn’t true. The atmosphere was thick with anger and hate. There was no peace.”

Meeks said he got “mixed reviews” for his actions on Tuesday.

“One guy shouted ‘black lives matter,’ and I shouted back ‘yes they do.’ Several people flipped me off, and a couple of ‘f*** you’ were shouted.”

“One lady flipped me off, and then stuck her hand down her mouth. I guess she was telling me that my actions were making her sick.”

Only one person actually stopped and spoke with Meeks.

“I’ll never forget it. This lady pulls up and gets out of her car. She’s wearing a mask and she seemed upset. Actually, she was crying. She kept getting closer so I told her I was social distancing.”

It turned out that the woman was a police officer and had just gotten off work.

“She was crying. She said I had made her day. I could tell that all the anti-police rhetoric had taken a toll on her. She just kept crying and thanking me.”

Since his retirement, Meeks has been working alongside Lt. Colonel Dave Grossman. The two of them have conducted over 100 seminars — Sheepdog Safety Training — around the country, most of them designed to assist churches and faith-based organizations in creating safe atmosphere.

Meeks said Colonel Grossman has come under a lot of fire lately.

“Some are actually saying he is the reason officers kill black men. The accusations have been unbelievable. I’ve seen some of the hate mail he’s gotten. I’ve never, in all my years, seen such venomous language. Colonel Grossman is a brother to me. A man of integrity and honor.”

Meeks’s organization, Sheepdog Seminars, have, for the most part, been shut down due to the false accusations of Grossman as well as COVID closures.

“They’ve kind of put us out of business, but I am confident we will bounce back.”

Meeks and Grossman, along with former police officer and author Adam Davis, have also put together a new kind of seminar, based on a book Grossman and Davis have written, On Spiritual Combat.

Meeks requested that Law Officer include his phone number in the article.