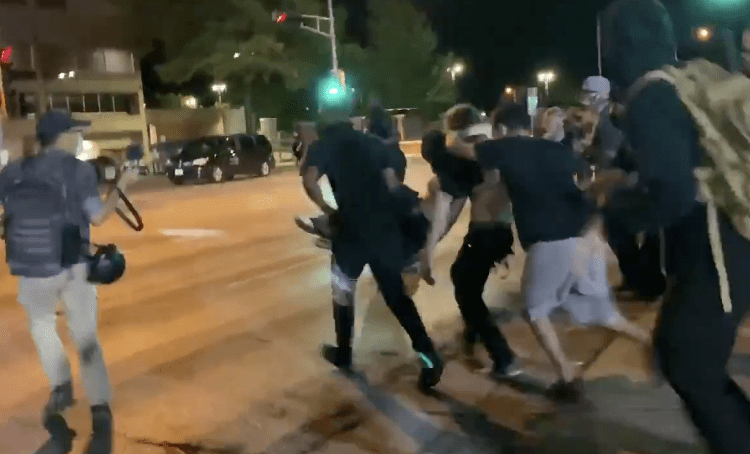 KENOSHA, Wis. — Police in Kenosha, Wisconsin, said early Wednesday that two people had been shot and killed and a third injured as riots continued for the third consecutive night following the officer involved shooting of Jacob Blake.

Court records show Kyle Rittenhouse, 17, will be charged with first degree intentional homicide for the Kenosha shooting. Rittenhouse is now jailed in Lake County, Illinois, and was arrested in Antioch, Illinois. He will appear for extradition hearing on Friday, USA Today reported.

Court records show Rittenhouse was charged there as a fugitive from justice on a homicide charge from Kenosha County.

Tuesday’s shooting happened at about 11:45 p.m., Kenosha police said, on Sheridan Road in the heart of Kenosha near the Froedert South hospital building. Many people were still on the streets in protest just before the shooting, walking up and down Sheridan Road, where protesters had been driven after being expelled from Civic Center Park.

The sounds of gunshots sent people running and looking for places to hide, including behind bushes along the hospital fence line.

One of the victims walked into the hospital after he or she was injured, Kenosha County Sheriff David Beth said. Another was picked up by law enforcement.

Cellphone video of at least two of the shootings that was posted online shows what appears to be a man with a rifle jogging down the middle of a street as a crowd and some police officers follow him. Someone in the crowd can be heard asking “What did he do?” and another person responds that the man had shot someone.

(Warning, Graphic/Violent)
A crowd chases a suspected shooter down in Kenosha. He trips and falls, then turns with the gun and fires several times. Shots can be heard fired elsewhere as well, corroborating reports of multiple shooters tonight #Kenosha #KenoshaRiots pic.twitter.com/qqsYWmngFW

Another video, posted to Twitter by Shelby Talcott of the Daily Caller, shows a gunshot victim lying in the parking lot. The victim appears to be the man who had been pursuing the gunman. The victim appeared to have been shot in the head, and bystanders were applying pressure to the wound, according to USA Today.

WARNING GRAPHIC: Man appears to have part his arm blown off. #Kenosha https://t.co/q2OUbMKmHO

Another angle of the shooting and moments after. Can see @RichieMcGinniss and others on scene giving aid. He was right next to the victim when the shooting happened.pic.twitter.com/CVfdc1DIQx

In a later video posted by Talcott, bystanders were carrying the victim across a road toward a hospital.

The victim who was shot in the arm ran away from the shooter, according to the report. A bystander who was live-streaming helped the victim with tying a tourniquet around his arm.

Earlier Wednesday, Sheriff Beth told the Milwaukee Journal Sentinel that one victim had been shot in the head and another in the chest late Tuesday, just before midnight. Beth didn’t know where the other person was shot, but video posted on social media showed someone had been shot in the arm.

The release from the Kenosha Police Department said the injuries to the third individual were not life threatening. The release said the names, ages and cities of residence for the victims were still being determined, USA Today reported.

Beth said people who fashion themselves as belonging to a militia have been patrolling Kenosha’s streets in recent nights, but he did not know if the shooter was involved with such a group.

“They’re a militia,” Beth said. “They’re like a vigilante group.”

A Journal Sentinel reporter earlier in the evening observed a group of armed men with long guns standing guard at a dry cleaning business, some on the roof.

Police told them to get off the roof and a person shouted back: “Officer, this is our business.” Police did not ultimately order them off the roof.