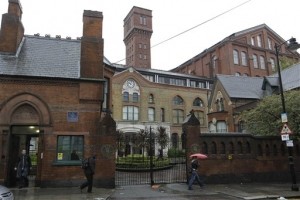 LONDON (AP) — Some London residents are getting troops and surface-to-air missiles on their rooftops for the Summer Olympics.

British security officials identified potential sites for the missiles on Monday and announced plans for security tests during the week.

News of one of the sites leaked out over the weekend when a journalist who lives in one of the buildings found a flyer notifying residents of the plan.

"From the few people I've spoken to, and the security we have here, they're not happy about it," said Brian Whelan. "I don't think it needs to be here at all."

Around 700 people living at Whelan's building in Bow — about 2 miles (3.2 kilometers) from London's Olympic Stadium — have been contacted and warned that the weapons and about 10 troops are likely to be based at the site for around two months. London is hosting the Summer Olympics from July 27-Aug.12.

In the leaflet, the defense ministry said the venue offered an uncluttered "view of the surrounding areas and the entire sky above the Olympic Park."

Troops plan to conduct tests this week at the building to determine if the high velocity surface-to-air missiles will be stationed on a water tower attached to the site's roof.

"The majority of this exercise will be played out in full view of the public and I hope that it will have a secondary effect of reassuring the British people that everything possible is being done to ensure this will be a safe and secure Olympic and Paralympic Games," said Defense Secretary Philip Hammond.

Britain has previously confirmed that up to 13,500 troops are being deployed on land, at sea and in the air to help protect the Olympics alongside police and security guards. Typhoon fighter jets, helicopters, two warships and bomb disposal experts will be a part of the security operation.