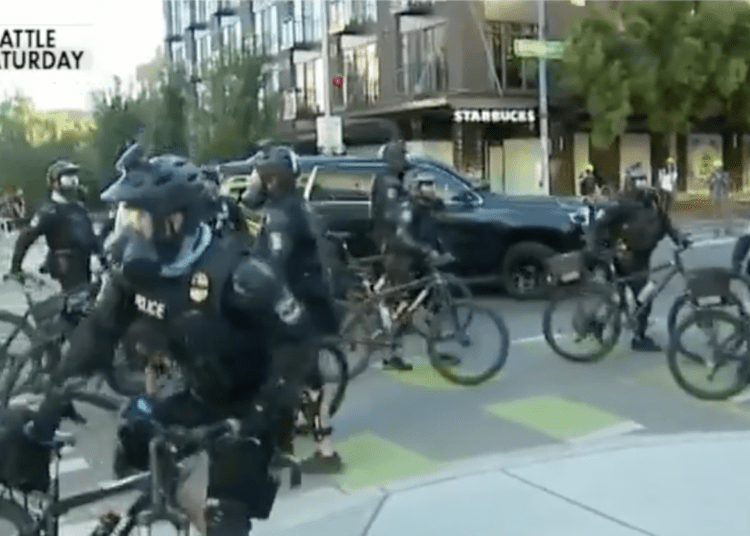 SEATTLE –- At least 41 officers of the Seattle Police Department have left the agency since the beginning of June, and sources in the department say several others are lining up to leave after a summer of street protests and attacks by City Council members that culminated recently with a vote to cut the police budget.

The department is also preparing for the departure of Chief Carmen Best, who decided to retire after the council’s decision to slash the department’s funding. It has prompted many officers to reevaluate their jobs with the city and the police department, KOMO reported.

“When the Seattle council made the decision to start cutting money from the police department, it would be silly for me not to sit down with my wife and talk about where do we take our family,” said Officer Adam Fowler, who plans to remain with the department.

During Sunday nights riots outside the Seattle Police Officers Guild offices, Fowler sustained a black eye when he was hit by fireworks.

Unfortunately, Fowler has plenty of company on the injured list. According to department spokeswoman Lauren Truscott, 144 Seattle officers have been hurt during citywide unrest since the end of May.

“It just feels so unfair that people are hating Seattle Police so much,” said Officer Ellie Khalife, who tore the meniscus in her knee during a protest outside the East Precinct in July.

Although Fowler knows he will recover from his injury, it’s the low morale that is most difficult to endure.

“Morale is not super great right now,” he said. “It’s pretty low, and a lot of people feel the same way I feel and are very frustrated.”

Furthermore, he said it’s the local politics more than protests that have led to escalated levels of frustration.

“And that’s a daunting feeling and a heavy weight and a heavy burden to carry, when you just feel alone in it,” he said.

Truscott said as of Wednesday no department layoffs have been made based on the 2020 budget cuts approved by council last week. But even before the layoffs and budget cuts were approved, several police officers began leaving SPD for other law enforcement agencies across the region.

KOMO News found that a handful of police departments and law enforcement agencies across Puget Sound have received inquiries or applications from or offered jobs to current Seattle police officers.

That totals more than 162 officers attempting to leave Seattle Police Department for a nearby allied agency. Combine that figure with 41 who’ve already departed, and the agency could be losing more than 200 officers in a relatively short period of time.

Truscott said it’s unclear if they will be able to address the layoffs suggested by the City Council through attrition, although at the rate officers are trying to leave, it seems feasible. One hundred (100) was the number of officers to be laid off after the budget was cut by the city council, Law Officer reported.

Fowler said he will remain committed to protecting public safety and public property as long as the protests continue in Seattle, but he hopes the city’s elected officials will show more support toward police officers.

“My feelings towards the rioters is not wearing on me,” he said. “I will always have time for people who want to cause destruction, harm to people living in the city. What is wearing is the current political climate in Seattle. I feel isolated. I feel like, the police department is on it is own in the city.”