18 rioters were taken into custody 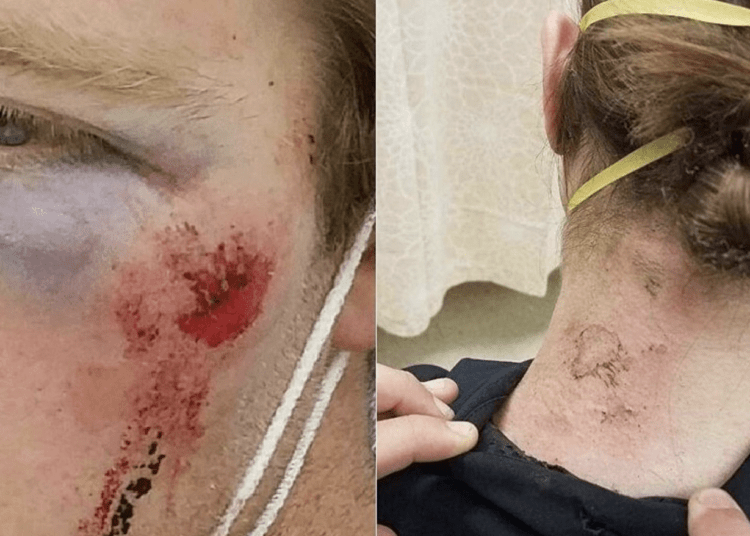 An officer's injuries after an explosive was thrown at them. Left photo shows injury to eye; right image shows burn injuries to back of neck. (Seattle Police Department)

SEATTLE — Eighteen people were taken into custody late Sunday in Seattle when another anti-police protest propelled into a riot. During the melee members from the violent group threw rocks and explosives at law enforcement officers, authorities said Monday.

The protest began in the Seattle neighborhood of SoDo around 7 p.m., with an estimated 100 people marching on foot with cars following behind them, according to a Monday morning press release by the Seattle Police Department. Antagonists made their way to the building that houses the Seattle Police Officer Guild and, within hours, the demonstration turned violent.

Sometime after 10 p.m., demonstrators detonated a “large explosive” and tried to break the window of a police car, authorities said.

Even after police officers ordered the crowd to disperse, people from the group began throwing bottles and rocks at them, Fox News reported.

“Multiple explosives were thrown toward officers,” according to SPD’s press release. “Several officers were struck by explosives and injured.”

Police then declared a riot and fired blast balls and pepper spray toward the crowd.

Three officers sustained injuries, and one was taken to an area hospital for treatment, police said. The officer’s condition was not disclosed.

Meanwhile, there were 18 suspects taken into custody and booked into King County Jail as a result of the night’s riots, according to police.